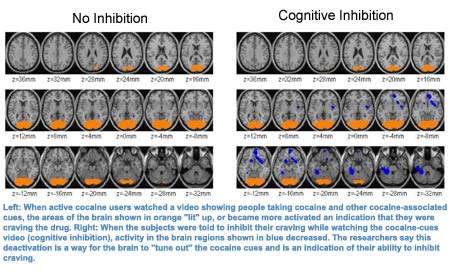 A new brain scan study conducted at the U.S. Department of Energy’s Brookhaven National Laboratory uncovered that cocaine abusers may be able to control their cravings. It showed that when active cocaine abusers were asked to inhibit their response to a ‘cocaine-cues’ video, they appeared to be capable of suppressing activity in brain regions associated to drug craving

New treatments should aid scientists in the enhancement of inhibitory control of users which in turn may avert relapse. The findings suggest that cocaine abusers could probably stop using drugs and avoid relapse with help from clinical interventions that are fabricated to strengthen these inhibitory responses.

“Exposure to drugs or stimuli associated with using drugs is one of the most common factors leading to relapse in drug-addicted individuals,” remarked Nora Volkow, Director of the National Institute on Drug Abuse and lead author on the paper.

“We know from previous studies that drug cues can trigger dramatic changes in the brain that are linked to a strong craving response,” further added co-author Gene-Jack Wang, Chair of Brookhaven’s medical department. “This study provides the first evidence that cocaine abusers retain some ability to cognitively inhibit their craving responses to drug-related cues.”

Volkow additionally mentioned, “Our findings provide enormous hope because they imply that cognitive interventions might be developed to maximize cocaine abusers’ success in blocking the drug-craving response to help them avoid relapse.”

The scientists were armed with a brain-scanning technique named positron emission tomography (PET) and a radioactively ‘tagged’ form of glucose that is considered to be the main fuel of the brain. They then sized up the brain activity in 24 active cocaine abusers during three different conditions. The first condition included subjects who simply lay in the scanner with eyes open and the second comprised of subjects who watched a ‘cocaine-cues’ video that included scenes which imitated the purchase, preparation, and smoking of crack cocaine. Finally the third condition was when subjects viewed the video but were asked to check their craving response. On separate days, scans were performed in random order.

The PET camera in each scan kept a track of the radioactive signal from the labeled glucose as it was consumed by different areas of the brain. Higher metabolic activity in a specific brain region may be indicated by a stronger signal where extra glucose could be used. The distinct method enabled scientists to correctly monitor which brain regions are supposedly most active. They could possibly also account how that activity alters over time or when responding to different situations.

The subjects’ heart rate and blood pressure was also measured and they were further asked to explain their craving level during the scans. As against the baseline condition, the cocaine-cues video was found to trigger increases in brain activity in several brain regions linked to drug craving. Experts suggest that it could also increase the subjects’ self-reports of craving.

The scans of subjects’ inhibitory response to the video, when pitted against the no-inhibition condition showed a considerable decrease in metabolic activity. This low activity appeared to be present in brain regions that involved experiencing and anticipating rewards along with an area of the brain that plays a significant part in assigning value, or salience, to different stimuli. Besides when compared with the no-inhibition video condition, during inhibition the subjects also reported lower levels of craving. Scientists associated with the study believe that the findings could have important clinical implications.

“Many current drug treatment programs help addicted individuals predict when and where they might be exposed to drug cues so that they can avoid such situations,” Volkow shared. “While this is a very useful strategy, in real-word situations, cues may come up in unexpected ways. Our findings suggest that a clinical strategy that trains cocaine abusers to exert greater cognitive control could help them selectively inhibit the craving response whenever and wherever drug cues are encountered — whether expectedly or unexpectedly.”

The study could have undertones for many other disorders such as gambling and obesity that include loss of behavioral control. This could be possible due to the importance of inhibitory control in managing emotions and desires.

The study is published in an upcoming issue of NeuroImage.