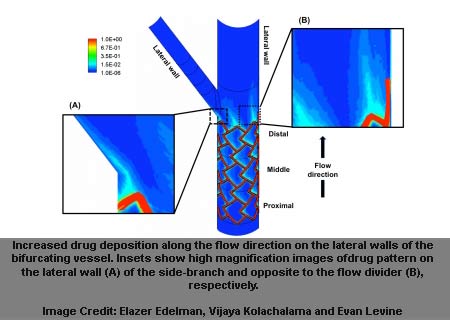 After experiencing heart attacks, patients are said to frequently obtain stents intended to hold their arteries open. A few of these stents apparently discharge drugs that are designed to stop the progress of tissue development in arteries. But at the same time, it could also possess grave side effects like augmenting the probability of blood clots and heart attacks.

Now a team of study authors from the MIT-Harvard Division of Health Sciences and Technology has apparently created a computer model that could clarify why those drugs, which contain rapamycin and its analogs in addition to paclitaxel could build up in the arteries and lead to blood clots.

The model supposedly enables the experts to envisage, for the first time, drug allocation in branched arteries. Their results could give details as to why drugs could heap up in particular regions, depending on where the stent is positioned comparative to forks in the artery.

“By observing the arterial drug distribution patterns for various settings, we understood that drug released from the stent does not reach uniformly to all regions of the vessel and this non-uniformity depends on where the stent is placed in the artery as well as the blood flow that is entering the vessel,” Elazer Edelman commented.

Apparently, more than one million patients in the United States are given drug-releasing stents every year. This computer model could aid stent developers to plan safer and more effectual stents and increase the option of creating individualized stents for patients. It could also assist the FDA in its clearance procedure for stents.

The findings were published in PLoS One.