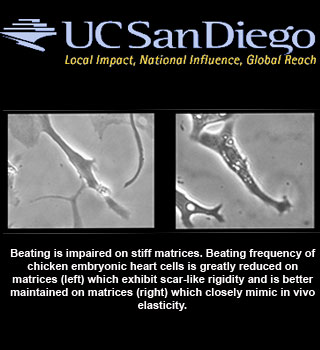 A few days back, we had come across a research that showed how bone marrow could lower the threat of a heart attack. Bioengineers from the University of California, San Diego put forth yet another research that should offer hope for patients with heart related disorders. The scientists claim to be working on the development of novel regenerative therapies for heart disease.

Researchers suggest that probably this finding may influence the manner in which regenerative therapies for cardiovascular and other diseases are treated in the future. Using adult stem cells, the experts were able to regenerate heart tissue in environments that appeared to imitate a human post-heart-attack heart.

Presented from the laboratory of Adam Engler from the Department of Bioengineering at the UC San Diego Jacobs School of Engineering, this novel work hopes to offer prevalent heart disease patients with new regenerative therapies to treat the condition.

A treatment called cellular cardiomyoplasty has also been known to treat a scarred heart muscle that results from a heart attack. It includes the injection of adult stem cells into the damaged muscle. For the development of cardiac muscle, this method depends on injected stem cells to receive correct signals from their surrounding tissue.

However, the researchers observed that on injecting stem cells into stiff, scarred, post-heart attack muscle instead of healthy tissue, the stem cells may not become cardiac muscle readily. Only a marginal enhancement in the overall cardiac function was supposedly detected by them. This improvement also seems to have not been from tissue regeneration. The experts suggest that the enhancements could be because the treatment appears to ‘poke holes’ into the scar tissue. It could also be injecting soft cells rendering it to be slightly softer and hence more functional.

An even more interesting discovery appeared to be the fact that the injected stem cells did not form new cardiac muscle. Alternatively they were found to form tiny calcified lesions. Seemingly directed by the stiff scar tissue, the injected stem cells could then mature into bone-like cells instead of new heart cells. It was because of these problems linked to direct stem cell injection; the bioengineers suggest the use of cells in a supportive material. Over time, this they point could alter the stiffness by displaying cross linking dependent on time.

“Results from this study may not only have a profound impact on cardiovascular engineering, but may influence the way in which many regenerative therapies are conducted. In this instance we have studied the developing tissue as a model, and from it generated a set of design criteria to mimic in our new material,” said bioengineering professor Adam Engler from the UC San Diego Jacobs School of Engineering. Engler is also affiliated with the UC San Diego Institute of Engineering in Medicine (IEM).

“Our evidence suggests that tissue-specific stiffness arises from key developmental changes, which implies that cells should be cultured in the appropriate physical conditions that mimic embryonic tissue progression, from soft, pre-cardiac tissue at early embryonic age to a mature, less compliant tissue at the conclusion of development,” mentioned Jennifer Young, a Ph.D. candidate in bioengineering at UC San Diego and the first author on the peer-reviewed presentation at ASCB 2009.

The bioengineers by tuning this material to mimic in place time-dependent stiffness changes seem to have discovered that cells placed in this material may point to improved cardiac differentiation.

This finding was presented in San Diego at the 2009 annual meeting of the American Society for Cell Biology (ASCB).