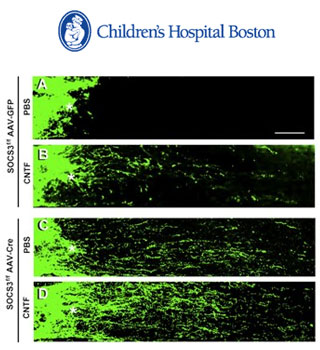 Typically brain and spinal-cored injuries seem to leave people with permanent impairment. This appears to occur mostly because the injured nerve fibres or axons are incapable of re-growing. However a new mouse study by Children’s Hospital Boston suggests that it may be possible to cajole the axons to regenerate by disabling ‘brakes’ in the system.

The experts claim that response to injury-induced growth factors could be revived. When a gene that suppressed natural growth factors was deleted, axons were observed to have regenerated vigorously in a mouse model.

Using genetic techniques, Zhigang He, PhD, of the F.M. Kirby Neurobiology Center at Children’s Hospital Boston and colleagues in an earlier study claimed to have deleted two inhibitors of a growth pathway known as the mTOR pathway in the retinal ganglion cells of mice. Comprising of the optic nerve, these cells are known to carry visual input from the retina to the brain.

A powerful growth was found in injured axons with this approach, though it was not seen in uninjured axons. This seemingly proposes that something about the injury itself could be aiding in triggering the axon regeneration. As part of the new study, Zhigang and his team offer additional evidence that lowered or lost responsiveness to injury-induced growth factors could be impairing regeneration of axons. They also a convey manner in which this problem could be overcome.

With the help of a second set of genetic techniques in mice, the experts deleted a suppressor of inflammatory signaling called SOCS3 in retinal ganglion cells. Post injury a robust axon growth was observed with the largest effect seen a week after the injury. This was supposedly when there were also signs that the mTOR pathway was re-activated.

Furthermore soon after injury, the authors found a surge in a growth factor named CNTF (ciliary neurotrophic factor) in the retina. On applying CNTF directly to the eye, the team found even more growth of axons as compared to when they only deleted SOCS3. CNTF however was found to have augmented the growth in mice that did not have SOCS3 deleted only moderately.

“CNTF and other cytokines [cellular signaling molecules] have been tested for promoting axon regeneration previously, but with no success,” notes He. “Now we know that this is due to the tight negative control of SOCS3. Inhibiting SOCS3, using small molecule compounds or RNAi, could allow these cytokine growth factors to be functional.”

On the basis of the team’s findings, another method of promoting axon regeneration could also be direct stimulation of the signaling pathway inhibited by SOCS3. This is known as JAK/STAT added Fang Sun, PhD, who shares first authorship of the paper with Patrice Smith, PhD.

The study was published in the December 10 issue of Neuron.