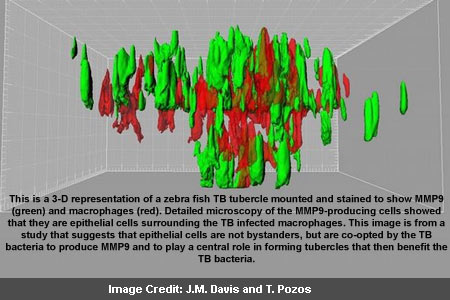 Epithelial cells are known to line the airways and other parts of the body to protect and defend it. It now appears that tuberculosis bacteria assume their use of these epithelial cells to generate tubercles.

Researchers at the University of Washington claim to have uncovered the signaling pathway used by the tuberculosis bacteria. They seem utilize this mechanism to press disease-fighting cells to switch faithfulness and work on their behalf, consequently encouraging tuberculosis infection.

Tubercles are supposedly the tiny, rounded masses characteristic of TB. They appear to enable the bacteria to grow in numbers, spreading to other locations. This same molecular signaling pathway apparently incites parts of the immune system to go into overdrive. This mechanism may probably play other roles in key inflammatory conditions as well like arthritis in addition to some types of heart disease and cancer

“If we could keep this pathway from inciting the host immune system, we may be well on the way to finding innovative new therapies against TB, as well as other serious disorders,” mentioned the senior researcher on the analysis, Dr. Lalita Ramakrishnan, University of Washington associate professor of microbiology, medicine and immunology.

Health researchers across the world seem to be keen on introducing novel treatments for TB. This is mainly because a number of the strains worldwide appear to have become resistant to conventional antimicrobials.

Ramakrishnan elucidated that blocking a host pathway used by the bacteria could be a completely different approach. Keeping in check the infection to disallow the body from holding and sustaining it instead of killing the bacteria itself could have new implications. Besides, if a host pathway blocker is possible it could be faster than present therapies. These seem to take a long time to keep the TB infection in control.

“Most diseases, such as high blood pressure and depression, are already being treated by blockers and inhibitors of host enzymes and pathways,” Ramakrishnan further mentioned. “Many of these turn down certain cell signals as part of their therapeutic action. We and some other researchers are now exploring the possibility of blocking or inhibiting molecular mechanisms in the body to prevent or treat infectious diseases as well. ”

Previous analysis by the researcher in the zebrafish exhibited that in contrary to earlier belief TB tubercles were not the way that the body walls off the bacteria to protect itself. These nodules instead appear to form the hubs for bacteria production and distribution. The body’s frontline soldiers mainly uninfected macrophages that can eat and destroy many bacteria seem to be by employed by these nodules, consequently infecting them. The TB bacteria however seem to be incapable of growing in the macrophages instead being killed. Dampening of the macrophages’ defenses could be the likely cause for this.

The research team has now recognized a mechanism by which the mycobacteria causing TB induces the body to form these production and distribution nodules. The TB virulence for long has been linked to small protein the bacteria secrete named ESAT-6. It has been observed that ESAT-6 induces epithelial cells to generate an enzyme called MMP9. Performing a number of tasks like breaking down gelatin, the presence of MMP9 in humans is also related to surged risk of the infection and worse outcomes.

Scientists observed if zebrafish became more resistant to TB by knocking out MMP9 production. They found that after TB infection, the embryos appeared to have increased survival rates along with lesser bacteria and fewer granulomas as against their normal MMP9-producing kin. Further analysis is required to understand interception of MMP9 production in epithelial cells as a possible TB therapy

The Dec. 10, 2009 express edition of Science features these results.