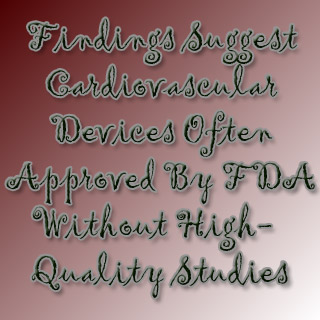 The New Year seems to bring with it alarming news for heart patients. New findings by experts from the University of California suggest that often cardiovascular devices gain an approval without high-quality studies. Supposedly the pre-market FDA approval of these devices is often based on studies that probably lack enough strength. It may also be possible that the analysis have been prone to bias.

The investigators apparently discovered approximately 80 devices that were at high-risk. Supposedly majority of these devices gained an approval on the basis of data from a single study only. With the number and usage of cardiovascular devices surging, this news seems to be of concern. According to the authors, the study data on which FDA approval is based should be of superior quality.

“In 2008, at least 350,000 pacemakers, 140,000 implantable cardioverter-defibrillators, and 1,230,000 stents were implanted. Although there has been recent scrutiny of evidence used in the U.S. Food and Drug Administration (FDA) drug approval process, less attention has been paid to the approval process for medical devices,” the authors mention.

To better understand this criterion, Sanket S. Dhruva, M.D., of the University of California, San Francisco, and colleagues evaluated the type and quality of study evidence which was used by the FDA for the premarket approval (PMA) of cardiovascular devices. The reason behind using these types of devices was that they were anticipated to undergo the most stringent approval process. This was considering their increasing usage and potential impact on illness and risk of death.

A systematic review of 123 summaries of safety and effectiveness data (SSEDs) for 78 PMAs for high-risk cardiovascular devices having received PMA between January 2000 and December 2007 was conducted by the authors. They claim to have examined the methodological characteristics and primary end points. According to the experts, SSEDs are intended to offer a reasoned, objective, and balanced critique of the scientific evidence that served as the basis of the decision to approve or deny the PMA.

A deep analysis revealed that of the 78 PMAs, 51 were supported by a single study and of the 123 studies apparently only 98 SSEDs reported the number of participants enrolled. Furthermore among the 123 studies in SSEDs, nearly 27 percent were found to have been randomized while 14 percent were blinded. Interestingly, fourteen percent of the studies reported came minus a stated primary end point. Moreover of the 213 primary end points, 52 percent were supposedly compared with controls.

In addition to this, the experts also discovered that of the 213 primary end points reported in the SSEDs, 15 percent of the results seemed to have been non-interpretable. Apparently, the most common reason for this was the absence of a target goal for the device performance in nearly 25 end points. In one instance the results were not stated.

“First, device approvals are a more recent activity for the FDA, having begun in 1976 with the FDA Device Amendment, so the agency has less experience with devices than it does with drugs. Further, the last decade has brought a significant increase in the number and complexity of devices,” the authors note.

The experts conclude, “The emphasis at the FDA in the last 17 years since the Prescription Drug User Fee Act has been rapid approval of new drugs. This study suggests that the emphasis for the FDA in 2009 and beyond must be approvals based on research that meets rigorous scientific standards for evidence of benefit and lack of harm to patients. To uphold the FDA’s mission of ensuring ‘safe and effective’ medical devices, it is essential that high-quality studies and data are available.”

Their study, the authors note was supposedly based on the information presented in the SSEDs. With some study information possibly missing, they however argue that SSEDs ‘should be a thorough and accurate compilation of the FDA’s critique of evidence.’

This study features in the December 23/30 issue of JAMA.