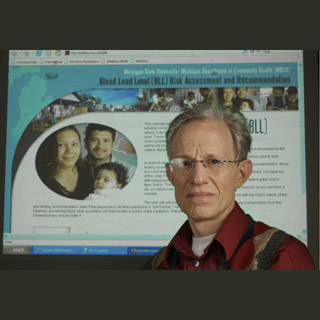 Approximately, 2,50,000 U.S. children under the age of 6 seems to have blood lead levels more than 10 micrograms of lead per deciliter of blood, the level at which CDC apparently advocates public health actions to be started. If not identified, lead poisoning may result in lasting developmental disabilities, brain damage and also death. US children soak up lead chiefly by taking in chips or dust from lead paint. This seems to take place either when the paint deteriorates or from household remodeling projects. An additional source is said to be lead contamination discovered in water and soil.

Since health departments across the United States apparently search for a better way to decide which children ought to be examined for lead poisoning, a technique developed by Michigan State University scientists has supposedly turned out to be more precise and cost-effective as opposed to present strategies.

In 2009, the Centers for Disease Control and Prevention advised an end to universal examination for children on Medicaid provided state and local health departments seem to be following other techniques of evaluating the threat of high blood lead levels. The present plan is said to depend chiefly on Medicaid status and categorizing ZIP codes as high or low risk.

The MSU risk evaluation, based on a decade of research is believed to be significantly superior. This was mentioned by Stan Kaplowitz and Harry Perlstadt, MSU professors of sociology, and Lori Post, a former MSU researcher now at Yale University.

Kaplowitz, principal investigator on the project, commented, “The key benefit of our method is that it identifies even more of those children who need testing and will lead to fewer unnecessary tests. Hence it will improve the health of children and families at less cost to the taxpayers.”

The scientists developed risk scores for over 5,00,000 children in Michigan who were examined for lead poisoning from 1998 to 2005. The scores are believed to be based on race, Medicaid eligibility and figures about the socio-demographic characteristics and age of the housing in the child’s neighborhood. It was apparently seen that their scores may have been superior predictors of whether a child ought to be examined as compared to the criteria used by universal testing.

To execute the new technique, parents or medical providers in Michigan apparently make use of a specific Web site. They enter a child’s address, Medicaid eligibility and race, and are instantly delivered with an exceedingly consistent evaluation of whether the child’s lead-poisoning threat is high enough to warrant a blood test.

The study would be published in the journal Public Health Reports.