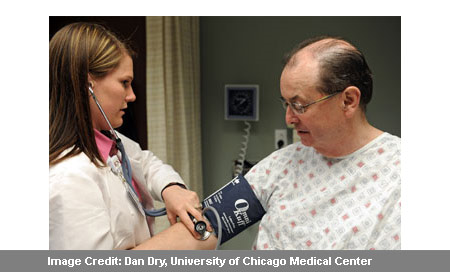 According to a new study conducted at the University of Chicago, persistent loneliness may lead to an increase in the rate of blood pressure over a period of four years. The study reveals a direct relation between loneliness and increase in blood pressure four years on. This revelation is different from factors like age, body-mass index, smoking, alcohol consumption and demographic distinctions such as race and income that may cause blood pressure to shoot up.

High blood pressure, also known as the ‘silent threat’, reportedly increases the risk of heart attack and stroke and the impairing of kidneys as well. The study took into consideration that depression and stress may be potential causes for rise in blood pressure; however these causes could not fully justify the reason for blood pressure to rise in lonely people aged 50 years and over.

Senior scientist, Louise Hawkley in her article wrote that, “Loneliness behaved as though it is a unique health-risk factor in its own right.”

Apparently, similar to blood pressure loneliness also is not easily traceable. Hawkley comments that even people with a large social circle can feel lonely if they discover their relationships to be futile. On the contrary, people with limited contacts could probably lead a perfectly content life with the few close relations that they nurture.

The study was conducted on 229 people within the age group of 50-68. The subjects were a mix of randomly chosen whites, African Americans and Latinos who had also been a part of a study on aging. During the study they were asked to evaluate their connection with others by filling out topics like ‘I have a lot in common with the people around me’, ‘My social relationships are superficial’ and ‘I can find companionship when I want it’.

During the 5 years that the study was being conducted, Hawkley claims to have discovered the direct connection between loneliness during the initial phases of the study and the increase in blood pressure over that period.

She says that, “The increase associated with loneliness wasn’t observable until two years into the study, but then continued to increase until four years later.”

The study indicated that even those with modest levels of loneliness faced a rise in blood pressure. From the sample it appeared that those who felt being lonely saw their blood pressure shoot by 14.4 mm which was high when compared to their communal associates.

“Loneliness is characterized by a motivational impulse to connect with others but also a fear of negative evaluation, rejection and disappointment,” Hawkley said. “We hypothesize that threats to one’s sense of safety and security with others are toxic components of loneliness, and that hypervigilance for social threat may contribute to alterations in physiological functioning, including elevated blood pressure.”

Lonely people seemingly are apprehensive about socializing and that may be the rationale behind the increase in blood pressure.

Mammography screening every other year could have maximum gains of yearly...