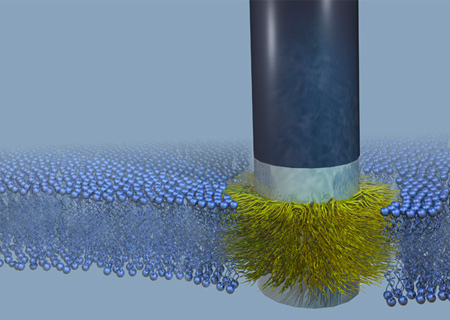 Scientists are attempting various means to comprehend how cells interact with each other and how they may react to medication. To enable this, Stanford engineers have crafted a nanoscale probe they may embed in a cell wall without impairing the wall.

The probe could facilitate researchers to hear electrical signals in the cell. The device could also offer a superior way of binding neural prosthetics and with modification, could be a possibility for injecting medication within a cell.Stanford engineers believe that everything from signals produced as cells converse with each other to ‘digestive rumblings’ as cells respond to medication could be checked for up to a week.

Present techniques of probing a cell seem to be so unhelpful; they generally only let a few hours of inspection before the cell dies. These scientists are claimed to be the first to insert an inorganic device into a cell wall without injuring it.

A cell membrane is basically a walled fortress. The wall itself is said to be a water-repellant, or hydrophobic, zone. As nearly all molecules in a living being are claimed to be water soluble, the hydrophobic area performs as an obstruction to keep the molecules from skidding through the cell wall. The only way in or out is by means of the specific proteins that apparently form bridges across the membrane. Those ‘transmembrane’ protein gateways are supposedly equivalent to the architecture of the membrane, with a hydrophobic center section bounded by two water soluble, or hydrophilic, layers.

Nick Melosh, an assistant professor of materials science and engineering in whose lab the research was done mentions that the vital design aspect of the probe is that it apparently imitates natural gateways in the cell membrane. With modification, the probe could function as a conduit for injecting medication into a cell’s greatly guarded interior. The 600-nanometer-long, metal-coated silicon probe appears to have been incorporated so effortlessly into membranes in the laboratory, the researchers have named it as the ‘stealth’ probe.

Nick Melosh, commented, “We can basically rip holes in the cells using suction, we can use high voltage to puncture holes in their membranes, both of which are fairly destructive. Many of the cells don’t survive.”

That seems to restrict the period of any observations, predominantly electrical measurements of cell function. The solution to the probe’s simple insertion and the membrane’s wish to maintain it is that the scientists apparently based its design on a kind of protein naturally seen in cell walls that apparently performs as a gatekeeper, monitoring which molecules are let in or out.

The vigilantly used metal coating on the stealth probe could provide scientists with electrical access to the interior of a cell, where they might check the electrical impulses provided by several cellular activities. That, merged with the probe’s steadiness in the membrane, could be a mammoth benefit to studies of particular electrically excitable cells like neurons, which could propel signals all through the brain, spinal cord and other nerves.

A device known as ‘patch clamp’ could be utilized to check those types of electrical signals among cells now. In its present form, it is said to be moderately basic.