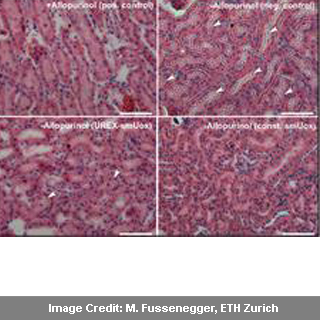 Gout is said to be a medical condition that is characterized with recurring attacks of acute inflammatory arthritis. It is said to be caused by higher levels of uric acid in the blood. Approximately 1 % of the population in the industrialized countries experiences this tremendously painful joint disease.

Study authors from the ETH Zurich’s Department of Biosystems Science and Engineering (D-BSSE) have apparently come up with a new technique for averting and lastingly eliminating the cause of gout. It includes embedding a biological network that apparently adjusts the uric acid levels autonomously.

The uric acid in the blood particularly needs to be in the correct dosage. If the level is too elevated i.e. more than 6.8 mg/dl blood, the uric acid appears to crystallize out, which could lead to kidney stones and gout. Nevertheless, uric acid could be a vital part of the human detoxification system, acting as a supposed ‘scavenger’ of free radicals, which may cause neurological disorders, brain diseases and tumors.

A set of experts led by Professor Martin Fussenegger from ETH Zurich’s D-BSSE in Basle has apparently now succeeded in putting up a network of genes which may lastingly keep the uric acid concentration in check. The beginning trials in mice have supposedly been hopeful.

In majority of the mammals, the enzyme urate oxydase seems to regulate the uric acid level. As humans evolved from the apes, nevertheless, they lost this enzyme, which is why one endures more from a high uric acid concentration. Study authors from ETH Zurich wanted to determine the means to correct the fault and reinstate the restrained control of the uric acid level. Bearing this in mind, they built a biological network of genes known as UREX. The individual components of UREX appeared to be ‘programmed’ in another way by the experts; a uric acid sensor may continuously measure and control the concentration in the blood.

The gene network is claimed to be incorporated in a single cell. About two million of these cells seemed to be covered in a seaweed gelatine capsule measuring 0.2 mm in diameter to defend the cells against an immune response. Pores in the capsule make sure that the cell is given an optimal supply of nutrients. The uric acid level could be measured by the sensor and the enzyme may find its way into the blood. Nevertheless, the organism does not get in touch with the network’s altered genes. Even if the technique was applied in humans, a direct interference in the patient’s genetic make-up would apparently not be required.

Martin Fussenegger commented, “Many medical problems are solved by introducing chemical substances, i.e. medication, into the body from outside. In our method, we repair a defective metabolic pathway and help the body to treat itself in the best possible way.”

The expert refers to it as a ‘molecular prosthesis’, an artificial aid that seems to reimburse for the evolutionary lack of urate oxydase.

The set of experts from ETH Zurich has fruitfully examined the UREX network on mice. As anticipated, the uric acid concentration in the blood reduced to a steady and fit level, and the uric acid crystals in the animals’ kidneys apparently dissolved. The study authors have supposedly already filed a patent application for the network, but the subsequent stages for its medical application are currently in the hands of other partners.

The study was published in the Journal Nature Biotechnology.