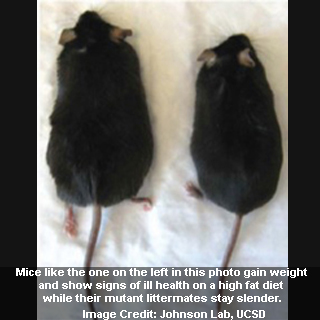 A study from University of California, San Diego claims that mice that are missing a protein caught up in the reaction of low oxygen seemingly remain slim and fit, even on a high-fat diet. While their usual littermates put on weight, develop fatty livers and become resistant to insulin on a high fat diet, similar to plump humans, the mutant mice apparently experienced none of these ill effects.

The protein, an enzyme known as FIH, seems to play a vital function in the physiological reaction of low levels of oxygen and could be a new aim for drugs to assist people who struggle with weight gain. Since the protein appears to influence an extensive array of genes included in development, the scientists were astonished that its removal supposedly enhanced health.

Na Zhang, a graduate student in Johnson’s lab and lead author of the study, commented, “We expected them to die as embryos. Then we saw they can survive for a long time. From the beginning I noticed that these mice are smaller, but not sick. These mice seem to be healthy.”

The lean mice appeared to encompass a high metabolism. Moreover, a common check for insulin resistance, a symptom of diabetes, seemingly disclosed a super sensitivity to insulin.

Zhang mentioned, “We fed the mice with a very high fat diet – 60 percent fat – just to see how they would respond. Mutants can eat a lot, but they didn’t gain a lot of weight. They are less fatty around their middles compared with their littermates.”

But the study authors wanted to discern what portion of the mouse physiology appeared to be accountable for the modifications, so they developed new mice in which the FIH protein was removed only in particular tissues: the nervous system or the liver. Mice that were not having FIH only from their nervous system appeared to exhibit most of the same effects.

Even though smaller, the mutant mice apparently eat and drink 30 to 40 percent more as compared to wild-type mice.

Randall Johnson, professor of biology at the University of California, San Diego, who directed the study, remarked, “Where do those calories go? To heat generation and an increased heart rate.”

They are also said to breathe heavily as opposed to normal mice, presumably taking in 20 to 40% more air.

The FIH protein is believed to be a part of an extensive system that appears to react to low levels of oxygen. The mice seemingly behave as if they are taking in thin air. Johnson mentioned that these mice never adjust to the apparent low oxygen. They stay in this acute phase of hypoxic response their whole lives.

The study was published in the journal Cell Metabolism.