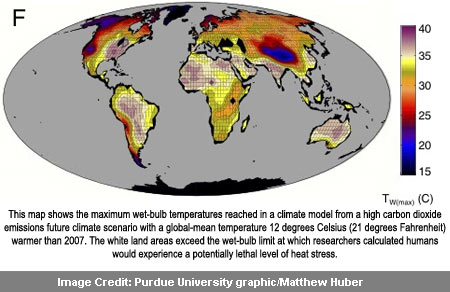 Incessant greenhouse gas emissions continue to be neglected making the globe a warm village. Research findings from Purdue University and the University of New South Wales, Australia remarked that, if these green house gas emissions are not controlled then worst-scenarios for global warming could probably be faced. This may further lead to deadly temperatures for humans in coming centuries.

For the very first time, researchers have measured the highest tolerable ‘wet-bulb’ temperature. It is found that this temperature seems to exceed for the first time in human history. The wet-bulb temperature is equal to what is felt when skin is introduced to moving air. It also includes temperature and atmospheric humidity. The temperature is measured by wrapping a standard thermometer bulb with a wet cloth and fully ventilates it.

Matthew Huber, the Purdue professor of earth and atmospheric sciences explained that the researchers calculated the wet-bulb temperature. It then appeared that the wet-bulb sustained above 95 degrees for six hours or more. This can cause a lethal level of heat stress, because the internal body temperatures of humans and most mammals are near 98.6 degrees Fahrenheit. The research seems to highlight the impacts of global warming but leaves out to provide new evaluations of the likelihood of future climate scenarios.

Huber said, “Although areas of the world regularly see temperatures above 100 degrees, really high wet-bulb temperatures are rare. This is because the hottest areas normally have low humidity, like the ‘dry heat’ referred to in Arizona. When it is dry, we are able to cool our bodies through perspiration and can remain fairly comfortable. The highest wet-bulb temperatures ever recorded were in places like Saudi Arabia near the coast where winds occasionally bring extremely hot, humid ocean air over hot land leading to unbearably stifling conditions, which fortunately are short-lived today.”

Huber informs that all the countries, throughout the globe would intermittently be subject to severe heat stress, requiring large-scale adaptation efforts. The Third World would, apparently be facing worst impacts as the standard of living may soar up. Also, the livestock on which we depend upon could possibly still be exposed. This could make any form of outside work hazardous. The Intergovernmental Panel on Climate Change estimate that by 2100 warming of seven degrees Fahrenheit will be seemingly faced. So, eventual warming of 25 degrees is feasible.

Huber further added, “We found that a warming of 12 degrees Fahrenheit would cause some areas of the world to surpass the wet-bulb temperature limit, and a 21-degree warming would put half of the world’s population in an uninhabitable environment. When it comes to evaluating the risk of carbon emissions, such worst-case scenarios need to be taken into account. It’s the difference between a game of roulette and playing Russian roulette with a pistol. Sometimes the stakes are too high, even if there is only a small chance of losing.”

However, Steven Sherwood, the professor at the Climate Change Research Centre at the University of New South Wales, Australia, who is the paper’s lead author, holds the view that prolonged wet-bulb temperatures above 95 degrees would be intolerable after a matter of hours.

Sherwood explained, “The wet-bulb limit is basically the point at which one would overheat even if they were naked in the shade, soaking wet and standing in front of a large fan. Although we are very unlikely to reach such temperatures this century, they could happen in the next.”

At rest, the human body generates about 100 watts of energy from metabolic activity. The wet-bulb temperature, estimates provide upper limits on the ability of people to cool themselves by sweating or otherwise through the dissipation process. For the dissipation process to occur, the surrounding ought to be cooler than the skin. The skin again, should seemingly be cooler than the core body heat. Only then will the cooler skin be able to absorb excess heat from the core and release it into the environment. Now, if the wet-bulb temperature itself is warmer then metabolic heat cannot be released. The magnitude and duration of the heat stress can potentially lead to dangerous overheating.

The National Science Foundation-funded research, analyzed the long-term implications of sustained greenhouse gas emissions on climate extremes. In order to conduct the analyses, the investigators used climate models to compare the peak wet-bulb temperatures to the global temperatures for various climate simulations. They apparently revealed that the peak wet-bulb temperature was rising approximately 1 degree Centigrade for every degree Centigrade increase, in tropical mean temperature.

Huber added, “These temperatures haven’t been seen during the existence of hominids, but they did occur about 50 million years ago, and it is a legitimate possibility that the Earth could see such temperatures again. If we consider these worst-case scenarios early enough, perhaps we can do something to address the risk through mitigation or new technological advancements that will allow us to adapt.”

It should be noted that, Huber, did the climate modeling on supercomputers operated by Information Technology at Purdue (ITaP), Purdue’s central information technology organization whereas Sherwood performed the wet-bulb calculations.

The research is currently available online and will be published in an upcoming issue of the Proceedings of the National Academy of Sciences.