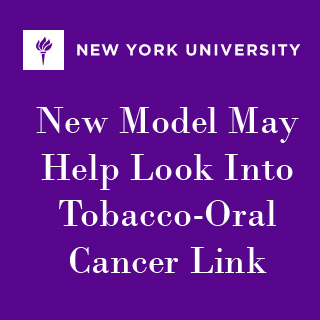 Tobacco has widely and quite rightly been accused as one of the leading causes of oral cancer. Apparently, a recent research conducted by the NYU College of Dentistry the Penn State Cancer Institute have shown that a very powerful carcinogen in tobacco smoke can be used for oral cancer research in experimental animals. This will provide a new, more relevant research model. This model will help to understand the initiation, progression, and, ultimately, help prevent oral cancer.

Alcohol use and exposure to the HPV-16 virus (human papilloma virus version 16) are the other leading causes of oral cancer. Several researches have been conducted to determine that impact of synthetic carcinogens manufactured especially for cancer research, rather than on observing the effects of carcinogens that occur in tobacco smoke. A patient suffering from oral cancer may permanently have to compromise with his/her ability to eat, drink, talk, and even kiss.

Dr. Joseph Guttenplan, a Professor of Basic Science & Craniofacial Biology at the NYU College of Dentistry, shared, “As a result of this study, we now have a model that is significantly better than past models which relied on synthetic carcinogens. We plan to use this new model in future studies to examine potential agents for cancer prevention.”

The study probably assayed the impact of injecting low, medium, and high doses of dibenzo[a,l]pyrene, into the mouths of 104 mice. Dibenzo[a,l]pyrene is a powerful carcinogen in tobacco. 24 mice were examined by the researchers for mutagenesis and 80 for carcinogenesis. The outcome of this experiment seemed to appear after 38 weeks as all the mice in the high-dose mutagenesis group developed excessive numbers of mutations in their oral tissue. Within a year, 31 percent of the high-dose carcinogenesis group displayed large tumors in their mouths. This developed model will probably help prevent oral cancer in the future.

The research was presented on April 19 at the 2010 annual meeting of the American Association for Cancer Research (AACR) in Washington, DC.