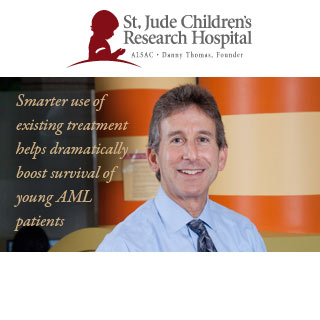 Acute myeloid leukemiais (AML) is a cancer of certain white blood cells. Every year, approximately 500 U.S. children, are diagnosed with this disease. However, the new study conducted by St. Jude Children’s Research Hospital, claimed that more individualized therapy and better supportive care helped push the survival for children with AML to 71 percent three years after diagnosis.

Although the cure rates for acute lymphoblastic leukemia (ALL), the most common childhood cancer, have soared to better than 90 percent, long-term survival among AML patients has lagged. The study claims that the survival rate of 71 percent is 20 percent better than previously reported U.S. rates, and is similar to the success achieved, in a 2009 Japanese study.

Rubnitz Jeffrey Rubnitz, M.D., Ph.D., a member of the St. Jude Oncology department and lead author of this study explained, “In this study, we focused on getting the maximum benefit from existing therapies and applying lessons learned from earlier studies to identify and treat patients who faced the highest risk of relapse.”

It is probably assumed that, AML patients seem to relapse within a year of diagnosis. But in some rare cases, cancer is likely return after two years. Rubnitz, exclaimed that, saving even more lives will likely require new medications and novel treatments.

Apparently, this is the first study which reveals that using minimal residual disease (MRD) helps to guide the timing and makeup of later chemotherapy. MRD measures cancer cells that survive treatment. Patients that were appointed, to more intensive therapy, had MRD levels of greater than 1 cancer cell in 1,000 normal bone marrow cells, after the first or second course of chemotherapy. MRD measures were employed during the study, to conclude which patients received the drug gemtuzumab ozogamicin.

This drug is approved, for use in AML patients aged 60 and older. Studies are being conducted, at present, to determine whether or not the same drug can be consulted for young patients. Usually, MRD screening is used to help guide ALL treatment but due to technical arguments, the widespread usage of MRD in AML care is arrested.

In order to prevent bacterial and fungal infections, for the first time patients were provided with antibiotics, after each course of chemotherapy. This strategy proved to be beneficial and decreased a vast amount of infections, including hospitalizations and deaths. The anti-fungal medication voriconazole, was given to all the patients but later the antibiotics vancomycin and ciprofloxacin were added.

In the study, patients between the age group of 2 days to 21 years were considered. The study answered queries about the benefits of a high dose of cytarabine, an anti-cancer drug in early treatment of the patient. But the study authors, found no additional benefit. Additionally, the authors utilized genetic factors, including chromosomal rearrangements and gene mutations, and tailored treatment to reflect if patients had high, standard or low risk AML.

Initially, all the patients were given a three-drug combination therapy, including either high- or low-dose cytarabine. Once, the first and second courses of chemotherapy were conducted, the authors used genetics factors and MRD measures to determine additional care a patient received. It included whether patients were referred for a transplant to replace, diseased blood-producing stem cells with cells from a healthy donor.

The study is currently featured in the online issue of the journal The Lancet Oncology and is scheduled for publication in the June print edition.