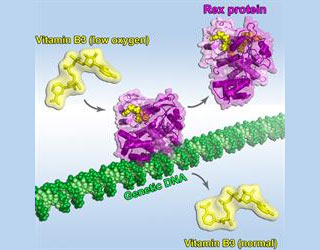 Niacin commonly known as vitamin B3 converts food into energy and determines a variety of processes, including erectile dysfunction, aging and sleep patterns in people. A ground-breaking research triggered by the University of Rochester Medical Center is alleged to have discovered first images of the common molecular signal namely vitamin B3, which plays a vital role in making some bacteria potent and some men impotent. The findings may open roots for developing antibiotics and various other treatments for erectile dysfunction.

Sensing vitamin B3 probably led to the identification of three-dimensional images of a protein in the act of responding to oxygen levels. It is assumed that vitamin B3 carries electrons from metabolized food to oxygen and acts as a sensitive indicator of oxygen levels in cells. During the investigation, researchers utilized specialized instruments. This helped them ascertain how the bacterial protein ‘Rex’ tracks the oxidation state of vitamin B3 which during low levels of oxygen achieve electrons.

Clara Kielkopf, Ph.D., associate professor in the Department of Biochemistry and Biophysics at the University of Rochester Medical Center and lead research author shared, “Vitamin B3 has been the focus of intense interest since its role as a signaling molecule was discovered, yet no one knew how proteins, the molecular machines of the cell, could sense the slight differences between the oxidized and reduced forms. An exciting implication of our findings is that antibiotics could be developed to change the shape of Rex-like proteins and turn off genes needed for a bacterial infection.”

When oxygen conditions are normal Rex may bind both vitamin B3 and the genetic material DNA, further blocking gene activity. Even in decreased oxygen levels Rex continues to remain bound to the electron-rich state of vitamin B3. But the scientists noticed that the protein changes its shape and releases itself from the DNA. This process seems to release genetic information to manage with confined oxygen supply. The authors mentioned that the transformation is central to the way proteins use vitamin B3 to sense oxygen levels and alter metabolic pathways.

Krystle McLaughlin, a doctoral student responsible for determining the Rex structures in this research alleged, “It’s amazing to think that less than 10 years ago no one knew the Rex pathway existed, and now we have obtained detailed structural snapshots of the Rex protein in action that allow us to understand how cells can respond to low oxygen levels. This knowledge lays the foundation for new ways to manipulate harmful bacterial pathogens and also facilitates our understanding of similar pathways in the human body.”

It is considered that Rex proteins are among pathogenic bacteria that cause anthrax infections, toxic shock syndrome, and pneumonia. So determining the way these proteins access cell signaling may help investigators find a means to avoid the microbes that cause such infections. During the erectile process in humans the vitamin B3 sensing system is apparently required to generate nitric oxide neurotransmitters.

Robert Bambara, Ph.D., chair of the Department of Biochemistry and Biophysics at the Medical Center enlightened, “This is an elegant example of how modern structural biology can reveal molecules that assume alternate shapes, and how those shapes control important life functions and response to infection.”
Scientists further explained that the findings are not limited to understanding toxic pathogens and impotence only. Many organisms continuously respond to changing oxygen levels and the investigators aim to determine the way they do it. The findings ascertain that decrease in oxygen level curbs cell division and ultimately cell death while an excess may damage cellular building blocks. They may further contribute to diseases like cancer, diabetes, cardiovascular disease and neurodegenerative disorders.

During the next phase of the research investigators may determine the differences between Rex and other vitamin B3 sensing proteins. The research will also consider other human proteins that sense vitamin B3 signals. Detailed three-dimensional shapes of these molecules that respond to oxidized versus reduced forms will possibly be presented in the near future.

The research is published in the journal Molecular Cell.