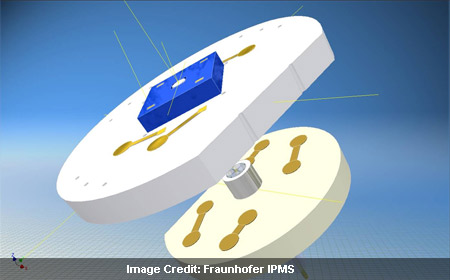 Most cancers are known to be detected through biopsies including tissue analysis process. With not every lump turning out to be a malignant tumor, these processes could be time consuming and inconvenient for the patients. Researchers at the Fraunhofer Institute for Photonic Microsystems IPMS in Dresden aim at detecting cancer at an earlier stage. They built a microscope head with a diameter of eight millimeters. It was observed that using this new device may help in early detection and enable doctors to take quick and necessary steps required for treatment.

This new device can optically resolve and magnify tissue cells which measure 10 to 20 micrometers and may be used in vivo cancer detection. It is particularly fitted on the tip of an endoscope and further inserted in the body by an invasive surgical operation. The researchers assumed that this device would eliminate the need for biopses. Until now endoscopes that can use microscopic image recorders have not yet been accessible.

Researchers claim to have discovered the first laser-based sensor for this purpose and it can be done by CCD or CMOS image sensors. These sensors are used in cameras and cell phones. MEMS based image sensors are beneficial as they can magnify even the smallest object fields like cells with the help of large lens. Researches combined the sensor with a microscanner mirror to achieve a resolution of 10 micrometers in order to magnify even the tiniest structures.

The system works with the laser located in the operating theater and the laser light being transferred to a microscanner mirror fitted on the tip of an endoscope through a transmitting fiber. The laser beam is deflected and the suspicious tissues are illuminated. The required light to the external sensor is transferred through a glass-fiber bundle which is placed on the tip of the endoscope. The external sensor receives a signal containing the image formation. The position of the scanner mirror is specifically considered by the detector and indicates which specific area is illuminated. A two dimensional image is formed by combining the image sensor and position signals.

The main highlight of this discovery was to produce an appropriate microassembly for the head of the endoscope. Researchers faced a challenge to produce a system capable for installation in the endoscope and succeeded in making the complete system. Scholles shares that in the future their microscope head will be produced in large quantities and it would be done through an automated process. There would also be subsequent installation in the endoscopes. Researchers conceptualize a large array of applications for the system. These applications inlcude not only in medical and biological microscopy but also in technical endoscopy. For example it can be used to evaluate cavities in buildings or to inspect the insides of engines and turbines.

The microscope will be demonstrated at the Optatec trade show in Frankfurt from June 15 to 18, 2010.

Promising novel path for treating traumatic injuries seems to have been...