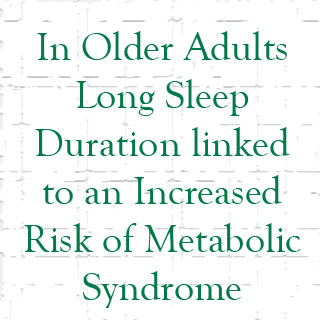 It was observed that 15 percent participants had a greater chance of being affected with metabolic syndrome if they had a habitual daily sleep of eight hours or more, this included naps. This relation was not affected by various factors such as demographics, lifestyle, sleep habits and metabolic makers. The observation was affected when participants with potential ill effects were separated from the study. Initial analysis signified that participants who slept for less than six hours were 14 percent more inclined to get affected with metabolic syndrome. It was found that this connection vanished after potential confounders were controlled.

“The most surprising aspect of our study was that long sleep – and not short sleep – was related to the presence of the metabolic syndrome” lead author Teresa Arora, research scientist at the University Of Birmingham School Of Medicine in Birmingham, U.K.

This study was considered to be the largest as it understood the link between sleep duration and metabolic syndrome which involved 29,310 people in Guangzhou, China. Information about total sleep was concluded with the help of a questionnaire. The participants involved were 50 years of age or older.

“Long sleep duration is unlikely to be the consequence of ill health in our population sample as we re-ran the analysis in a smaller subset of ‘healthy’ elders, and the findings remained,” she said. “Our follow-up data will allow us to make causal inferences.”

Experts share that the cross-sectional nature of the study did not help in understanding the cause. Arora highlighted that the secondary analysis including healthy elders makes the results interesting. He further adds that longer sleep causes an increased risk of metabolic syndrome and it would have important public health implications.

“We can recommend that long sleepers reduce the amount of overall sleep they achieve, which may in turn have beneficial effects on their health,” she said. “Programs can be developed to modify sleep in an attempt to reduce the health burden on elderly populations, who are already at higher risk of disease.”

According to a U.K study which was published in the February issue of the journal Sleep healthy older adults particularly without sleep disorders may have lowered sleep needs and are expected to be less sleepy during the day as compared to healthy young adults. The May issue of Sleep included a study of 15,638 revealed that weighted average sleep among Chinese older adults was about 7.5 hours which included naps.

This study was presented on Tuesday, June 8, 2010, in San Antonio, Texas, at Sleep 2010, the 24th annual meeting of the Associated Professional Sleep Societies LLC.