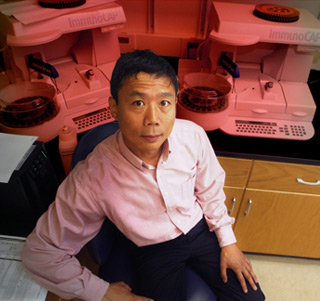 Experts from the MCG’s Georgia Prevention Institute share events where excess inflammatory factors resulting from excess fat stimulates the body to retain more sodium and as a result more fluid and higher blood pressure. The scientists revealed that a biomarker in the urine may help physicians in the future discover the most useful therapy for these patients.

A process drafted by the team appears to begin with fat producing more inflammatory factors, such as interleukin-6, or IL-6. Increased production of prostasin was identified when mouse kidneys cells were exposed to IL-6. Prostasin is a protease that prevents a protein’s action by cutting it. It was observed that when prostasin cut fellow protein ENaC it augmented its activity and so salt reabsorption. ENaC is the last of many kidney channels that decides how much sodium to excrete. Even though ENaC calls the shots on a moderately small amount of sodium it’s important in a system that is all about balance.

Dr. Yanbin Dong, geneticist and cardiologist at MCG’s Georgia Prevention Institute explained, “It’s very special; there are not too many proteases like that. We found that in cells fed IL-6, ENaC gets activated and the cells take in more sodium. It is the last step of your salt reabsorption.”

It is difficult to analyze if these mouse cell findings are true in humans but measuring prostasis that is excreted in the urine may be a way to determine ENaC activity in human. Dong is measuring its levels among obese people with or without hypertension and even among normal-weight individuals. Experts share that a simple urine test may help identify those at risk for or experiencing this type of inflammation-based hypertension.

A number of cholesterol-lowering or antihypertensive agents including statins and angiotensin antagonists available in the market are known to restrict some aspect of inflammation. Angiotensin antagonists for example restrict production of angiotensin II which restrains blood vessels and increase IL-6 production. Dong shares that prescribing these drugs to obese people is seemingly validated by a good reason.

This study was published in the American Journal of Physiology Regulatory – Integrative and Comparative Physiology.