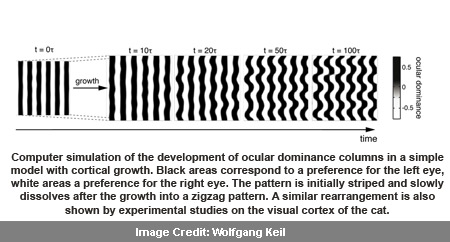 Scientists seem to have been confused for a long time as to why a baby’s brain changes easily and is specifically flexible. A group of researchers from the Bernstein Network Computational Neuroscience, the Max Planck Institute for Dynamics and Self-Organization in Gottingen, the Schiller University in Jena and Princeton University (USA) reveal that it may be because the brain has to still develop.

Neuronal connections in the visual cortex of cats were explained with a combination of experiments, mathematical models and computer simulations. These connections reorganize during the growth phase which may be explained by self-organizational processes. The brain is known to change continuously and neuronal structures change with every learning step and experience.

Development of the visual cortex may be robustly affected among animal experiments in the first three months of life, for example by different visual stimuli. Processing of information from the eyes may be divided by nerve cells in the visual cortex of fully grown animals. For example some may see only the left eye while others only the right. Cells related to right or left specialization lie close to each other in small groups called columns. Experts identified that during growth columns do not magnify but they increase in number.

The number of nerve cells does not change as new columns do not form new nerve cells. Increasing non-neuronal cells are attributed to a large part of the growth of the visual cortex. These changes may be explained by the fact that existing cells change their preference for the right or the left eye. Other researchers also highlight changes in the arrangement of the columns. Initially the pattern appears stripy but gradually these stripes dissolve causing the pattern to become more irregular.

Wolfgang Keil, scientist at the Max Planck Institute for Dynamics and Self-Organization Göttingen and first author of the analysis shares, “This is an enormous achievement by the brain undertaking such a restructuring while continuing to function. There is no engineer behind this conducting the planning, the process must generate itself.”

The findings were headed by Matthias Kaschube, former researcher at the Max Planck Institute for Dynamics and Self-Organization and now at Princeton University (USA) In order to analyze how the brain could proceed to achieve restructuring, experts used mathematical models and computer simulations. On one hand the brain was found to attempt to maintain the neighborhood relations in the visual cortex as consistent as possible and on the other hand the growth of the visual cortex is said to be determined by the visual process itself. Experts observed cells which were once stimulated by the left or right eye to uphold this specific calling.

Formation of columns taking both these tendencies into account is explained by the experts’ model. They showed the columns in the computer model change exactly as they had observed in their experimental studies on the visual cortex of the cat when the tissue grows and the size of the column is kept constant. The stripes when dissolve into a zigzag pattern causing it to become irregular. This provides a mathematical basis which practically explains how the visual cortex could reorganize during the expansion phase.