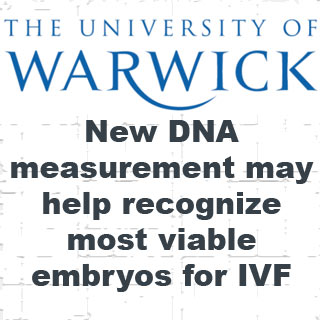 A woman unable to conceive even after undergoing various treatments may be recommended to undergo an IVF treatment. Though this form of treatment is seldom unsuccessful many women seemingly undergo the treatment more than once. A study undertaken by the University of Warwick and University Hospitals Coventry and Warwickshire NHS Trust has apparently measured the exact region of DNA in human embryos. Calculating the length of this region is assumed to determine the marker for embryonic development.

Experts now reveal that measuring the DNA supposedly recognizes the most viable embryos for IVF. They further claim to have measured telomeres which are safeguarded from deterioration by the regions of repetitive DNA at the ends of a chromosome. Scientists have made it clear that telomeres appear to shorten whenever a cell divides and once the length of telomere is extremely short the cells eventually die.

“It has already been shown that artificially shortened telomeres cause problems in animal embryos. Human embryos are highly variable, and many of them cannot develop normally. We think that telomere length might one day be used to help diagnose which are the most viable embryos. We also know that telomeres shorten with oxidative stress, so telomere length might also provide a measure of the stressfulness of the culture systems that we use in IVF and their impact on embryos,” explained Professor Geraldine Hartshorne from the University of Warwick’s Warwick Medical School.

Investigators believe that at around two days when an embryo development is in the early stages, the length of the telomere is the shortest. It should be noted that at five days the telomere extends before implantation in the womb. This process of telomere lengthening seems to be crucial for normal development as short telomeres don’t appear to be able to survive the various rounds of cell division occurring once the embryo begins to grow.

Sarah Turner, from University Hospital, Coventry affirmed, “These results have given us plenty of new questions as well as answers. We now need to find out why telomere length is relatively short in early development. Our next steps are looking at single sperm and eggs to work out where the telomere length in early embryos is coming from.”

During the study investigators employed donated oocytes and embryos of patients subjected to IVF treatment. The authors further clarified that all materials utilized during the study were the ones that could not be of any use for the patients’ own treatment.

The study is published in Molecular Human Reproduction Journal.