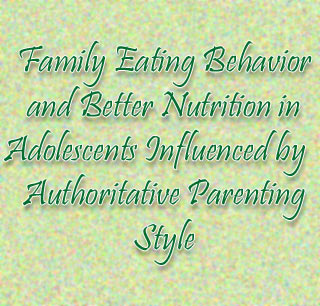 It was once quoted very rightly that ‘A family that eats together stays together.’ As a recent study initiated by the scientists from the University of Minnesota have apparently revealed a link between parenting style and the frequency of meals eaten together as a family. They also claim that an authoritative parenting style correlated with more frequent family meals.

Having scrutinized the study data, the authors concluded that family meals have a positive influence on youngsters to eat healthy food. Four groups of parents were ascertained depending on the parents’ style being responsive and/or demanding. These included authoritative, authoritarian, permissive, and neglectful.

The authoritative group encompassed parents who understood and were respectful, yet set clear boundaries and expectations. Although these parents showed little warmth, they still ensured strict discipline. While their permissive style was compassionate with some rules, their neglectful style was emotionally uninvolved with no rules or expectations.

Data from the Project EAT (Eating Among Teens) was analyzed by the investigators. This data included two groups of adolescents. While the first group encompassed 1608 students from middle school, the second group was formed by 3074 students belonging to high school. These students filled in the surveys in 1999 and 2004. These surveys inquired about the students eating habits, parental styles, and various socioeconomic variables.

The investigators analyzed this data and revealed that the cross-sectional results for adolescent girls probably display a positive link between maternal and paternal authoritative parenting style and frequency of family meals. On the other hand, an association between maternal authoritative parenting style and more frequent family meals was registered in case of adolescent boys.

Longitudinal results did highlight that five years later, a correlation in authoritative parenting style and higher frequency of family meals was noted. But this link was reported only between mothers and sons or between fathers and daughters.

The study is published in the July 2010 issue of the Journal of the American Dietetic Association.