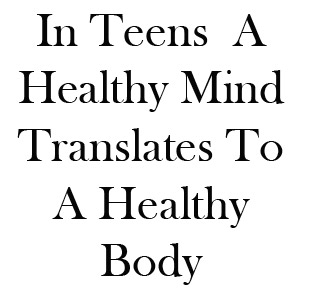 Buddha once quoted, ‘The mind is everything. What you think you become.’ True to this, the University of South Florida in the US suggests that happy teenagers are healthy. It has been assumed that youngsters’ positive emotions and moods and their satisfaction with life are more crucial than their anxiety or depression levels in order to anticipate their physical health.

The experts elucidated that understanding adolescents’ so-called ‘subjective well-being’ can ascertain those who are likely to develop health problems in the future. Appropriate prevention strategies can then be employed for such teens.

Until now most of the investigations that have been carried to examine the link between mental health and physical health in teens, usually aim to identify the way symptoms of poor mental health, or psychopathology, namely anxiety and depression correlate to physical functioning. However, this approach is seemingly unable to understand the potential influence of positive indicators of mental health, like positive emotions, mood states and life satisfaction, termed as subjective well-being.

The authors affirmed, “Findings from the current study underscore the importance of attending to positive wellness-focused indicators of mental health among youth. Subjective well-being is a significant, unique, and primary predictor of important physical health outcomes in youth and is more strongly associated with physical functioning than is psychopathology. Examining only psychopathology may lead to an underestimation of the relationship between mental health and physical health in young people.”

Emily Shaffer-Hudkins and her colleagues claimed that this is the first ever study focusing on both positive and negative indicators of mental health in relation to physical health. The study included 401 students in grades 6-8 from a suburban southeastern middle school in the United States. The youngsters were asked to rate their satisfaction with life as to if they had recently felt excited, strong and proud included as positive affect as well as lonely, guilty and sad encompassed as the negative affect.

The adolescents were also questioned about feeling withdrawn, anxious and depressed and about delinquent and aggressive behavior which are all known to be indicators of psychopathology. Lastly, the teens reported about their physical health. The scientists supposedly revealed a strong association between perceived good physical health and feeling excited, strong and proud.

Supposedly, the study authors suggest that positive and negative indicators of mental health need to be considered while developing a comprehensive model of mental health. Models employed for understanding wellness need to encompass a joint mind and body approach.

The study is published in the journal Applied Research in Quality of Life.