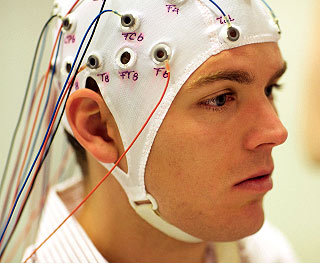 The human brain seems to have boundless tangled secrets. The scientists from the Yale School of Medicine reveal that electrical fields observed within the brain can also influence the activity of brain cells. Techniques affecting electrical fields like transcranial magnetic stimulation and deep brain stimulation now seem to be effective for the treatment of various neurological disorders, such as depression.

The findings seem to question the possible effects of electrical fields like power lines and cell phones too. The experts ascertained that majority of the brain’s electrical activity is a result of the chemical processes generating tiny charges in the membranes of neurons. Such fluctuations are possibly detected by electroencephalograms or EEGs when they occur in large numbers of neurons together.

“It’s like asking whether the roar of the crowd in the football stadium also influences you to cheer as well. And in turn, your cheering encourages others to cheer along with you,” remarkedDavid McCormick, the Dorys McConnell Duberg Professor of Neurobiology at Yale School of Medicine, a researcher of the Kavli Institute of Neuroscience and senior author of the research.

Information about some cognitive and behavioral states seems to be included in these internal electrical signals. However, if the activity of the brain really alters is apparently not been proven till date. While conducting the research, the investigators introduced slow oscillation signals into brain tissue. This supposedly enabled the experts to identify that the signal created a sort of feedback loop. Also alterations in the electrical field protecting neural activity appeared which in turn strengthened the electrical field.

During epileptic seizures, such ability of the electrical fields that are generated by the brain to direct its own activity may appear prominently. But the influence of electric fields does not seem to remain confined to these pathological states. Normal activities like sleep are also ascertained to be affected due to the influence of electrical fields on the brain function. The findings supposedly put forth a different view of the brain function and may be of immense clinical value in controlling epilepsy, depression and other neural dysfunctional states.

The research is published in the July 15 issue of the journal Neuron.