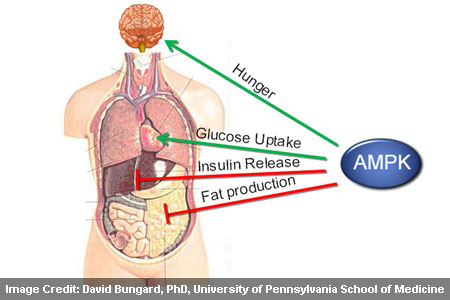 Over the past decades, scientists worldwide are apparently investigating the role of AMP-activated protein kinase, or AMPK. It is believed to be a master regulator protein of metabolism that is conserved from yeast to humans. The AMPK seemingly halts processes utilizing energy and turns on processes producing energy when the cell is too low. Supposedly scientists discovered that AMPK binds directly to sites on chromosomes known as promoters controlling gene expression that is linked to cell metabolism.

The epigenetic may not alter or mutate in DNA sequence, but changes the nucleus. Although it does not change the DNA sequence, it possibly changes the histone proteins that are known to be the backbone of the chromosome. The histone proteins that are assumed to be identified in the nucleus are seemingly involved in the packaging and ordering of DNA into structural units. On the other hand, epigenetic changes modify the way DNA folds in chromosomes. This seems to alter the way genes are accessible to regulatory proteins and enzymes that copy genes into RNA messages.

Apparently two genes controlled by AMPK at the histone level in the nucleus have been found. The researchers claim to identify them in tissue-culture cells and the same is yet to be affirmed by experimenting on animal models. Since the main role of AMPK is to sense cell stress, the investigators employed an ultraviolet radiation and low levels of glucose which are a common source of cell energy to stress the research cells. It was observed that the AMPK picks up the cell-stress signal and travels to the nucleus during the sequence of events after stress. When AMPK travels, it possibly binds with p53 protein which is a vital tumor suppressor.

Shelley Berger, PhD, Daniel S. Och University Professor and director of the Epigenetics Program of University of Pennsylvania affirmed, “Epigenetics is the research of how factors outside of actual DNA interact with, but not alter, genes. It is turning out, through recent discoveries, that epigenetic information plays an important role in human health and disease.”

This binding may led to phosphate inclusion in a histone near the p21 gene, which is known to turn the gene on. It is believed that the p21 halts or slows down the cell cycle till the energy levels are back to normal. Other genes controlled by AMPK also seem to have identical mechanism to allow direct control of various processes that AMPK regulates. Processes namely sugar storage, insulin production, and other pathways, are apparently modified in obesity and diabetes.

David Bungard, PhD, a postdoctoral fellow in the Berger lab at the University Of Pennsylvania School Of Medicine said, “Our results show a direct link between the energy state of the cell and its epigenetic status.”

Claimed to be a novel discovery, the researchers displayed AMPK to be present on chromatin which target histones. The findings also suggest p53 to be involved in sensing stress through the AMPK. It is determined that all stressed cells respond in similar way as other stress-response proteins may employ identical epigenetic pathways. Since AMPK is ascertained to be a target of metformin, treatments for diseases like diabetes and cancer can be identified. Analyzing the alterations in gene expression due to AMPK may shed light on new disease-associated targets and potential therapies.

The research is published online in Science Express.