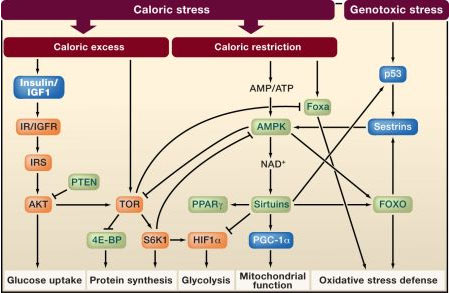 Here is a probable scientific reason why some humans live longer than others. A team of experts claim that a complex network of genes, in combination with a low-calorie diet and exercise, are a key factor in a long life expectancy.

Longevity supposedly depends on the network of 750 genes amongst which a third play a major role, especially in the ability of cells to generate energy from food. Investigations on mice registered change from 350 to 900 days in life expectancy, depending on the presence or absence of these genes.

Professor Johan Auwerx elucidated, “Looking at a whole group of genes and their interactions to understand longevity is an original approach because until now researchers were looking more at individual genes to find the answer.”

It should be noted that just the presence on this network of genes do not assure long life, certain lifestyle habits also fall into consideration. It is the combination of the genes work and lifestyle habits like consuming a low-calorie diet and exercising that confirm longevity. It is believed that for living longer, we should meet only 80% of our food needs.

Riekelt Houtkooper, researcher of the EPFL’s Nestlé Chair in Energy Metabolism, enlightened, “The long-term goal of this research is not only to allow people to live to a ripe old age, but also to get them there in good health.”

The experts claim that the interaction between the genes and lifestyle habits and the chemical compounds that can reproduce them will be determined in the near future. The immunosuppressant Rapamycin is already considered to affect longevity. Therefore Rapamycin was employed on mice during the experiment. The outcome was that the mice possibly lived longer even if they were already old.

The research is published in Cell magazine.