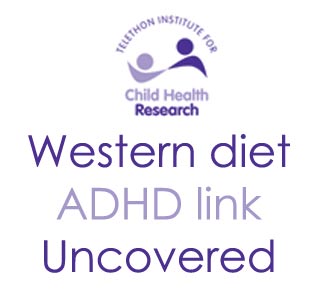 Attention-Deficit Hyperactivity Disorder (ADHD) commonly identified in adolescents especially boys seems to be linked with our daily diet or at least the following article says so. A latest study initiated by the Perth’s Telethon Institute for Child Health Research sheds light on the probable link between ADHD and a ‘Western-style’ diet in youngsters. It was ascertained that a diet following the Western pattern could almost double the risk of suffering from this illness.

Throughout the study, investigators analyzed the dietary patterns of 1800 youth. All the study participants belonged to the long-term Raine Study. Investigators defined these participants diet as ‘Healthy’ or ‘Western’ patterns. A diet rich in fresh fruits and vegetables, whole grains and fish was termed as a ‘healthy’ pattern. This diet may encompass higher levels of omega-3 fatty acids, folate and fibre.

“We found a diet high in the Western pattern of foods was associated with more than double the risk of having an ADHD diagnosis compared with a diet low in the Western pattern, after adjusting for numerous other social and family influences. We looked at the dietary patterns amongst the adolescents and compared the diet information against whether or not the adolescent had received a diagnosis of ADHD by the age of 14 years. In our research, 115 adolescents had been diagnosed with ADHD, 91 boys and 24 girls,” shared Associate Professor Wendy Oddy.

Takeaway foods, confectionery, processed, fried and refined foods followed the category of ‘Western’ pattern. Such a diet seems to be rich in total fat, saturated fat, refined sugar and sodium. Food included in the Western pattern seemingly revealed colors, flavors and additives to boost chances of ADHD. The study findings helped scientists to highlight the possible link between Western pattern diet and ADHD.

Dr Oddy remarked, “When we looked at specific foods, having an ADHD diagnosis was associated with a diet high in takeaway foods, processed meats, red meat, high fat dairy products and confectionary. We suggest that a Western dietary pattern may indicate the adolescent has a less optimal fatty acid profile, whereas a diet higher in omega-3 fatty acids is thought to hold benefits for mental health and optimal brain function. It also may be that the Western dietary pattern doesn’t provide enough essential micronutrients that are needed for brain function, particularly attention and concentration, or that a Western diet might contain more colors, flavors and additives that have been linked to an increase in ADHD symptoms. It may also be that impulsivity, which is a characteristic of ADHD, leads to poor dietary choices such as quick snacks when hungry.”

The investigators suggest more investigations ascertaining the type of relationship between ADHD and diet. Since the current analysis is assured to be a cross-sectional study, the scientists were unable to determine if poor diet causes ADHD or ADHD leads to poor dietary choices and cravings.

The study is published online in the international Journal of Attention Disorders.