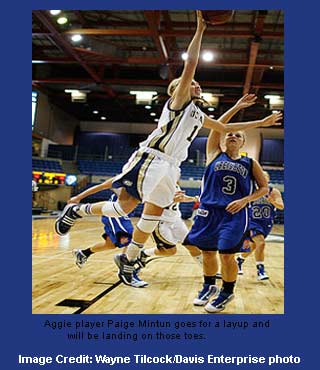 Athletes especially women may often suffer from anterior cruciate ligament (ACL) injuries. The following investigation can probably benefit sports players in avoiding such damage. A groundbreaking study from UC Davis claims that alterations in training can decrease force on knee joints and help decline the risk of developing ACL tears.

It is known that the anterior cruciate ligament which can be found in the middle of the knee gives stability to the joint. ACL injuries seemingly occur when an athlete comes down from a rebound, while catching a pass or on a jump-stop lay-up. Such tears may not take place due to a big jump, collision between players or a noticeably bad landing.

The study was initiated on 14 female basketball players from UC Davis and local high schools. Various instruments were fitted onto the volunteers and with the help of digital cameras experts measured the movements and muscle activity of the study subjects. As the participants were practicing a jump-stop movement, very much identical to a basketball drill the investigators estimated the forces acting on their knee joints.

David Hawkins, professor of neurobiology, physiology and behavior at UC Davis commented, “We focused on an easy intervention, and we were amazed that we could reduce shear load in 100 percent of the volunteers.”

Normal movement of the athletes was first recorded. Then they were made to perform an altered technique. According to this technique, an athlete has to jump higher to land more steeply, land on toes and bend knees more deeply before taking off again. All the participants grasped the new technique and were possibly able to decrease the force passed up to the knee joint through the leg bone known as the tibial shear force. This reduction was apparently by an average of 56 percent. Simultaneously the athletes also appeared to jump an inch higher than before, without losing speed.

It is crucial that warm-ups exercising the knee and focusing on landing on the toes and balls of the feet be introduced. The experts do not suggest these techniques to decline ACL injuries. They mention the need for a full clinical trial and follow-up. Previous investigations have supposedly linked high tibial shear forces to blown knees. Most athletes often tend to slip back to learned habits and many a times ‘muscle memory’ seems to takes over. In such circumstances, more intensive off-court training and practice can be possibly undertaken.

The study was published online on August 3 in the Journal of Biomechanics.