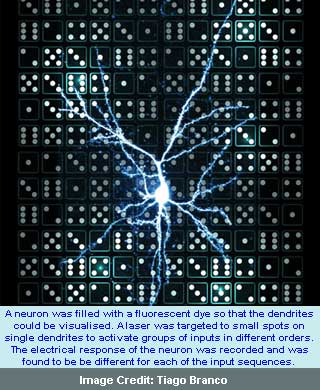 Novel discoveries may help to track down the innumerable complexities of the human brain. A latest research initiated by the UCL neuroscientists ascertains single neurons in the brain to categorize different sequences of incoming information. Single neurons even distinct dendrites which are the tiny receiving elements of neurons are believed to distinguish between different temporal sequences of the coming information.

Previously it was assumed that only when large numbers of neurons work together, this kind of processing in the brain is possible. The research highlights the importance of even the basic components of the brain in significantly computing devices. At the time of the investigation, researchers employed a mouse model for examining neurons in areas of the brain held responsible for processing sensory input from the eyes and the face.

Tiago Branco first investigator of the research remarked, “In everyday life, we constantly need to use information about sequences of events in order to understand the world around us. For example, language, a collection of different sequences of similar letters or sounds assembled into sentences, is only given meaning by the order in which these sounds or letters are assembled. The brain is remarkably good at processing sequences of information from the outside world. For example, modern computers will still struggle to decode a rapidly spoken sequence of words that a 5 year-old child will have no trouble understanding. How the brain does so well at distinguishing one sequence of events from another is not well understood but, until now, the general belief has been that this job is done by large numbers of neurons working in concert with each other.”

The investigators also utilized a laser in order to ascertain the response of neurons in different order of a number of inputs. This laser enabled researchers to activate inputs on the dendrites in exactly defined patterns. All the resulting electrical responses of the neurons were recorded. The outcome was that every single sequence created a different response, even if it was delivered to a single dendrite.

By a theoretical modelling, the investigators noted that two sequences are likely to be different from each other. Single neurons are affirmed to be reliable decoders of temporal sequences of inputs, and can be hallmarks in sorting and interpreting the enormous barrage of inputs acquired by the brain. It is predicted that this new property of neurons and dendrites may now become a vital element to the ‘toolkit’ for computation in the brain.

The research is published in Science.