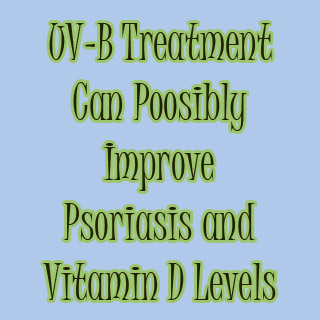 Psoriasis is an ailment affecting 1.5 percent to 3 percent individuals. It is believed that abnormalities in vitamin D metabolism play a role for the development and worsening of this skin condition. Experts claim that treatment with narrow-band UV-B heightens serum levels of vitamin D and declines psoriasis.

Vitamin D may be generally acquired by skin production after exposure to solar UV-B. Less than 15 percent is apparently gained from dietary sources like oily fish and fortified foods. Investigators claim that narrowband UV-B treatment is the standard light therapy for psoriasis. In the course of the study, the authors examined 30 consecutive psoriasis patients treated with narrowband UV-B. They were subjected to this treatment thrice a week until their psoriasis cleared between October 2008 and February 2009.

Scientists comment, “At the end of the study, all patients in the treatment group were vitamin D sufficient, but 75 percent of the control group had vitamin D insufficiency [serum 25(OH)D level of less than 20 nanograms per milliliter].”

Caitriona Ryan, M.B., B.Ch., B.A.O., then of St. Vincent’s University Hospital, Dublin, and now of Baylor Research Institute, Dallas, and colleagues measured serum vitamin D levels of the participants before the study, after four weeks of treatment and on completion of the treatment. These levels were compared with those of 30 control psoriasis patients who did not undergo UV-B therapy. Also the severity and dermatology-related quality of life in psoriasis was examined before and after treatment.

Scientists mention that the levels of serum 25-hydroxyvitamin D [25(OH)D] elevated considerably among individuals receiving UV-B therapy. The levels supposedly increased from a midpoint of 23 nanograms per milliliter to 59 nanograms per milliliter at the end of treatment. It is assumed that levels of serum are the most precise measurement of vitamin D levels in the body. No alterations were seemingly observed in the control group.

Experts highlight, “We cannot conclude, therefore, that narrowband UV-B mediates its therapeutic effects by increasing vitamin D levels. This suggests that the improvement in both vitamin D status and psoriasis are contemporaneous, but unrelated, consequences of narrowband UV-B, or that there is another explanation for the causal relationship.”

Psoriasis severity scores appeared to decline in the UV-B group, from a median of 7.1 at the beginning of the study to 0.5 after treatment. It was affirmed that the median scores did not change in the control group. Patients who were treated with UV-B, registered alteration in their vitamin D levels. This change was further linked with the number of exposures and the cumulative dose of UV-B. But was not associated with whether psoriasis responded to the treatment.

Participants in need of a greater number of exposures to clear displayed a significantly higher serum 25(OH)D level. Authors assume this level to have greater chances of producing more prolonged exposure to narrowband UV-B. Irish patients who were suffering from psoriasis and were not being treated with UV-B showed a considerable rate of vitamin D deficiency. It was therefore concluded that additional supplements can avoid harmful effects of this insufficiency.

The study was published in the August issue of Archives of Dermatology, one of the JAMA/Archives journals.