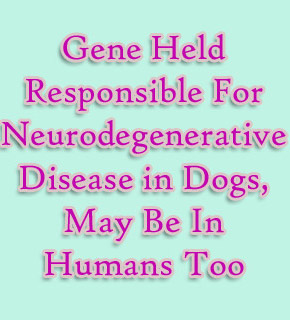 American Staffordshire terriers can possibly be affected by a neurodegenerative disease. This disorder which may begin with mental and motor deterioration, ultimately leads to dire consequences. A latest research undertaken by the North Carolina State University claims to have identified a gene triggering the disease. It has been revealed that the same gene is seemingly responsible for an identical rare, fatal disease in humans.

The findings may help scientists to develop better screening and diagnosis of the disease in dogs and prescribe an accurate treatment for canines and humans. The newly found gene in dogs is believed to result in a variant of neuronal ceroid lipofuscinoses (NCL), which is a family of diseases. It was claimed that though rare, NCLs are generally observed in children. An adult-onset form of the disease in humans is known as Kufs’ disease. During this adult disease, neurons present in the brain eventually die further leading to loss of vision, epilepsy, dementia and loss of coordination.

Dr. Natasha Olby, associate professor of neurology, commented, “The disease became so prevalent because it was a recessive disease with a late onset. Carriers of a single copy of the mutated gene never develop symptoms, and dogs with two copies of the gene might not show symptoms until five or six years of age, so the mutation was able to take hold in the breeding population.”

In American Staffordshire terriers, the canine version of adult-onset NCL supposedly destroys the neurons in the cerebellum that regulate balance. The gradual results may be that, the cerebellum gets shrunk, motor control is hampered and the dog is unable to survive or has to be euthanized. By scrutinizing the genetic analysis, researchers were probably able to locate the specific gene.

It is claimed that this gene is an entirely novel mutation and has not been reported in humans. The mutation can seemingly allow scientists to test samples from humans with NCL and determine if the mutation causing Kufs’ disease is similar to that found in dogs. Investigators affirm the canine disease as a good model of adult human form of the disease. The results can probably help understand the precise development of this disease.

The research was published in the August 17 issue of the Proceedings of the National Academy of Sciences.