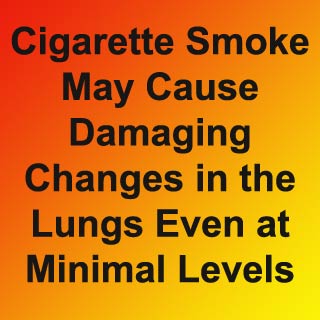 Casual smokers often think that smoking a few cigarettes per week does not make a big difference. However, experts from NewYork-Presbyterian Hospital/Weill Cornell Medical Center share that having an occasional smoke or being exposed to secondhand smoke may apparently harm more than people may consider. These findings may lend support to public smoking ban.

When people are exposed to even low-levels of cigarette smoke they could be at risk for future lung diseases like lung cancer and chronic obstructive pulmonary disease. Epidemiological studies highlighted that secondhand smoke is harmful. However, until now there have been no specific conclusive biological tests revealing how it affects the body at a gene function level.

Experts share that genes usually activated in the cells of heavy smokers are turned on or off among those individuals with minimal exposure. Scientists examined 121 people from three different categories namely non-smokers, active smokers and low exposure smokers. They evaluated urine levels of nicotine and cotinine to identify each individual’s category. These are usually considered as markers of cigarette smoking within the body.

“Even at the lowest detectable levels of exposure, we found direct effects on the functioning of genes within the cells lining the airways,” quoted Dr. Ronald Crystal, senior author of the study and chief of the division of pulmonary and critical care medicine at NewYork-Presbyterian/Weill Cornell and chair of the department of genetic medicine at Weill Cornell Medical College in New York City.

“The genetic effect is much lower than those who are regular smokers, but this does not mean that there are no health consequences,” elucidated Dr. Crystal. “Certain genes within the cells lining the airways are very sensitive to tobacco smoke, and changes in the function of these genes are the first evidence of ‘biological disease’ in the lungs or individuals.”

Further, experts scanned every person’s complete genome to conclude which genes were either activated or deactivated in cells coating the airways. They identified that there was no specific level of nicotine or cotinine that did not relate with genetic abnormalities.

“This means that no level of smoking, or exposure to secondhand smoke, is safe,” remarked Dr. Crystal. He goes on to say that these genetic changes are like a “canary in a coal mine,” warning of potential life-threatening disease, “but the canary is chirping for low-level exposure patients, and screaming for active smokers.”

Experts conclude that this is further evidence sustaining the ban of smoking in public areas where non-smokers and employees of businesses are put at risk for potential lung disease.

These findings were published in the American Journal of Respiratory and Critical Care Medicine.