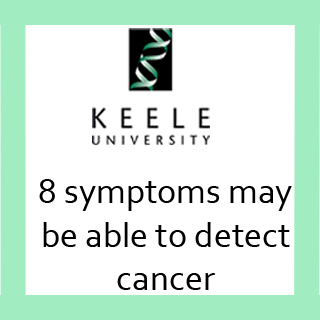 Previously, we had penned a post on the possibility of breast cancer cell growth being promoted by nicotine binding to receptor. Recently, researchers from Keele University have identified eight cancer symptoms which could predict cancer with adequate accuracy. These eight clinical attributes are claimed to foretell the growth of cancer with a high probability rate. In certain cases they may prove to be beneficial to detect cancerous tumors in their most infant stage.

Dr Mark Shapley and his fellow coworkers from the Keele University classified these symptoms with which doctors can diagnose urgent examination of individuals falling into specific age and sex groups, except if there are other individual patient centered reasons. These symptoms are suggested to be iron deficiency anemia, a breast lump, rectal examination suggestive of malignancy, haematuria, rectal bleeding, haemoptysis, post-menopausal bleeding and dysphagia.

“After carefully analysing twenty-five studies from the UK, US, Netherlands, Belgium, Australia, Denmark and Germany, we identified the eight symptoms. We recommend research and development of general practice computer systems to produce effective warning flags when the symptoms, signs or test results with a risk of 5% or more from unselected primary care populations are entered for patients within the specified sex and age groups. GPs should audit their management and reflect upon these cases as part of their appraisal to improve quality of care. There should be more open public debate on the level of risk that triggers a recommendation for referral by a GP,” commented Dr. Shapley, the lead-author.

These eight signs predicting cancer are said to have the potential to assist in early detection of cancer so that it can be treated in its primary stage. The researchers plan to undertake further research in the primary care setting to offer GPs with better and more accurate methods to detect and diagnose cancer in its initial stages.

The eight symptoms have been published in this month’s British Journal of General Practice (BJGP).