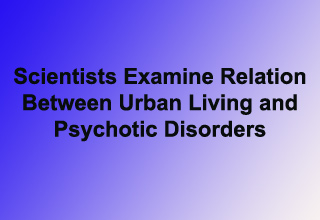 Attributes of neighborhoods that have been apparently linked with an augmented risk of developing psychosis subsume population and ethnic density, deprivation and social fragmentation or reduced social capital and cohesion. Now, experts share that the relation between psychotic disorders and living in urban areas seems to be an indication of enhanced social fragmentation present within cities.

Scientists examined around 2,03,829 individuals who lived in Sweden. This was mainly done to evaluate whether individual, school or area characteristics are linked with psychosis and may have the ability to highlight the connection with urbanicity. The data for analysis was at the individual, school, municipality and county levels.

“There is a substantial worldwide variation in incidence rates of schizophrenia,” the authors commented. “The clearest geographic pattern within this distribution of rates is that urban areas have a higher incidence of schizophrenia than rural areas.”

The findings reveal that the risk of non-affective psychosis was greater in cities and towns as compared to rural areas. Among 2,03,829 individuals who were enlisted for the study, 328 were ever admitted with a diagnosis of schizophrenia.

The authors further added, “Our findings highlight the concern that physical integration alone is not sufficient but that some of the positive characteristics traditionally conferred by segregation, such as a localized sense of safety, cohesion and community spirit, must also be maintained to enhance the mental health of individuals within the population.”

The apparent link between urbanicity and non-affective psychosis was explained by higher-level characteristics, primarily school-level social fragmentation. Experts evaluated cross-level markers of ethnicity, social fragmentation and deprivation on risk of developing any psychotic disorder with the help of qualitative patterns of interaction.

These findings will be published in the September issue of Archives of General Psychiatry.