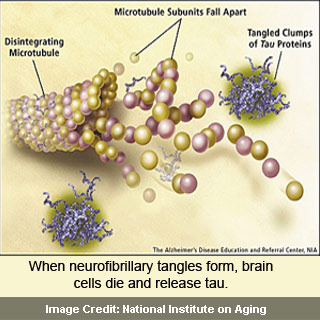 Understanding Alzheimer’s disease seems to have taken the center stage of investigations for scientists. Just recently we reported a research which linked increased levels of brain protein to Alzheimer’s. Now investigators from the Washington University School of Medicine in St. Louis claim to have discovered a gene variation that anticipates the rate at which Alzheimer’s disease will progress. Findings seemingly highlight the way Alzheimer’s patients can develop dementia after diagnosis.

While undertaking the investigations, scientists examined 846 patients with heightened levels the protein termed as tau in their cerebrospinal fluid (CSF). It was observed that tau protein in the CSF is an indicator of Alzheimer’s disease. The researchers also assessed single DNA variations in the patients and noted that a genetic marker is associated to increased tau levels. That marker is apparently related to rapid progression of Alzheimer’s disease. Damage from the disease can apparently be present for years before symptoms occur. It has been suggested that elevated tau, combined with the genetic marker can be a sign that clinical symptoms quickly advance from mild impairment to severe dementia.

Alison M. Goate, DPhil., the Samuel and Mae S. Ludwig Professor of Genetics in Psychiatry and the senior investigator commented, “People who carry this genetic marker tend to have higher tau levels at any given stage of the disease than individuals without it. Until now, most studies of genetic risks associated with Alzheimer’s disease have looked at the risk of developing the disease, not the speed at which you will progress once you have it. The genetic marker we’ve identified deals with progression.”

Previous analysis concluded that measuring amyloid beta protein may help diagnose Alzheimer’s disease in patients showing no clinical symptoms. The present study suggests that A-beta makes up the senile plaques that form in the brains of Alzheimer’s patients. But low levels of A-beta in the CSF predict presence of Alzheimer’s pathology in the brain. On the other hand, tau protein was observed to accumulate in the other abnormal brain structures that characterize an illness called as neurofibrillary tangles.

Carlos Cruchaga, PhD. an assistant professor of psychiatry at Washington University and the first author, said, “Tau also can be released in stroke patients or those with other types of brain injuries. However, a particular form of tau is specific to Alzheimer’s. It’s a phosphorylated form of the protein called ptau. Other neurodegenerative conditions, like Parkinson’s disease, don’t produce elevated ptau in the CSF. It’s only found in Alzheimer’s disease.”

It is assumed that these tangles cause brain cells to die, and when those cells die, tau is released into the CSF. Therefore just like A-beta in the CSF, elevated tau levels too can seemingly predict the presence of Alzheimer’s disease. Investigations mention that there is no link between ptau and overall Alzheimer’s disease risk or age of onset for Alzheimer’s patients. However a significant correlation between variant of a gene that is involved in modifying the tau protein, ptau levels in the CSF and the rate at which the disease progressed appeared.

It is presumed that by declining tau pathology in those individuals who also have low levels of A-beta in the CSF, progression of the disease can be slowed down. The research findings may provide aid in designing clinical trials. With knowledge about progress rate, scientists can possibly better prescribe medications to slow the progression of Alzheimer’s disease.

The research was published online in the journal PLoS.