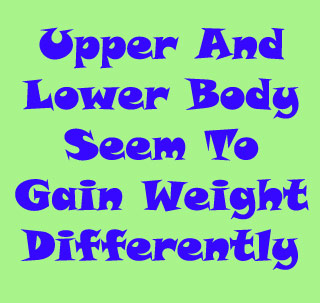 Individuals with increased abdominal fat may face a significant risk of developing metabolic disease. But people with fat expansion in the thighs probably have lower chances of being diagnosed with such ailments. Scientists from the Mayo Clinic shed light on probable weight-gain patterns in upper and lower body.

Since cellular mechanisms are different, aggregation of abdominal fat may take place by individual cells expanding in size. The femoral or lower body apparently gains weight depending upon the number of fat cells that elevate. So, different mechanisms are probably unable to create similar impact. The study was triggered on 28 volunteers among whom 15 were men and 13 women. These subjects were overfed with giant candy bars, ice cream shakes, and high calorie drinks for eight weeks to gain excess weight.

On an average, all volunteers seemingly gained 2.5 kg or 5.5 lbs of upper body fat and 1.5 kg or 3.3 lbs of lower body fat. Before attaining weight preadipocytes within the upper body supposedly displayed elevation in RNA messages known to prompt proteins for synthesizing fat. It is known that preadipocytes are cells capable of becoming mature fat cells. Michael Jensen, M.D., Mayo Clinic endocrinologist and lead author of the study, and colleagues measured body fat along with fat cell size before as well as after the eight weeks of overeating. It was concluded that heightened capability of producing lower-body fat cells may develop a form of protection to the upper body and aid in avoiding metabolic disease. Such ailments possibly give rise to diabetes and other complications.

The study is published in PNAS.

Can bone marrow be promptly restored after damage by leukemia treatment?