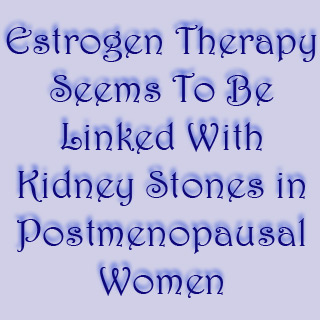 Data from the national Women’s Health Initiative study was scrutinized by the investigators. It encompassed information about two trials which included 10,739 postmenopausal women with hysterectomy. These participants were provided with an estrogen-only treatment or matching placebo. On the other hand, 16,608 postmenopausal women without hysterectomy were given an estrogen and progestin treatment or matching placebo. Scientists gathered data for an average of 7.1 years in the estrogen-only trial and 5.6 years for the estrogen plus progestin trial. 335 cases of kidney stones were registered in the active treatment groups and 284 cases in the placebo groups.

The beginning demographic characteristics and risk factors for kidney stones appeared identical in both the groups. It was ascertained that estrogen therapy is correlated with a considerable increase in risk of kidney stones. Experts noted that the corresponding annualized incidence rate per 10,000 women annually was 39 in the treatment group and 34 in the placebo group. Women with a history of kidney stones were probably five times more capable of developing kidney stones in the initial stages of the study. But no major changes were seemingly mentioned by estrogen therapy.

Also no significant association between kidney stones and age, ethnicity, body mass index, before hormone therapy use or employment of coffee or thiazide diuretics appeared. Naim M. Maalouf, M.D., of the University of Texas Southwestern Medical Center, Dallas, and colleagues believe that estrogen therapy elevates risk of nephrolithiasis in healthy postmenopausal women. The findings may be vital in the decision-making process of postmenopausal estrogen usage.

The study was published in the October 11 issue of Archives of Internal Medicine, one of the JAMA/Archives journals.