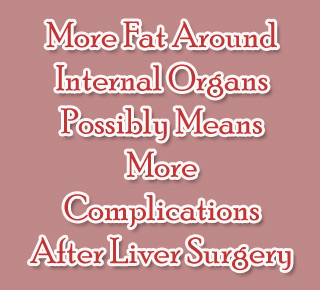 A novel link between intra-abdominal fat and chances of undergoing difficulties following major liver surgery seems to have surfaced. According to a recent study, the amount of intra-abdominal fat decides rate of complications after a liver surgery. It was pointed out that appearing overweight or a high BMI may not be correlated with elevated post-surgical risks.

During the study, 349 patients subjected to surgical removal of a liver part between June 1996 and November 2001 were examined. Prior to surgery, patients went through computed tomographic (CT) scans for analyzing the amount of perinephric fat. This fat is probably found around the kidneys and is utilized as a surrogate for intra-abdominal fat. Authors also measured the BMI of each patient and complications were noted. After the major liver operations, 230 patients representing 65.9 percent reported difficulties and 9 patients forming 2.6 percent died. Investigators observed that the average length of hospital stay was 10.8 days.

Experts said, “As defined by a simple, single surrogate measurement of perinephric fat, intra-abdominal fat was able to be used to risk stratify the patients for mortality, complication rate, severity of complications and increasing length of stay. This should help surgeons be better able to identify high-risk patients and, conversely, not refuse an operation based on the presumed high risk of someone with external obesity. Now that most of our patients being considered for a major upper abdominal resection will have a preoperative computed tomography scan, the information provided by looking at levels of perinephric fat is easily determined and should not be ignored.”

Katherine Morris, M.D., from the Memorial Sloan-Kettering Cancer Center, New York, and colleagues conclude that the amount of fat surrounding the kidney signifies the likelihood of complications. So patients with more intra-abdominal fat are probably more susceptible to difficulties including the severe ones. Such patients may also face longer lengths of hospital stay and are at a higher threat of death within 30 days than those with less fat. It was marked out that greater BMI and amount of outer abdominal fat are not related to the rate of complications, occurrence of severe complications, length of stay or risk of death within 30 days.

The study is published in the November issue of Archives of Surgery, one of the JAMA/Archives journals.