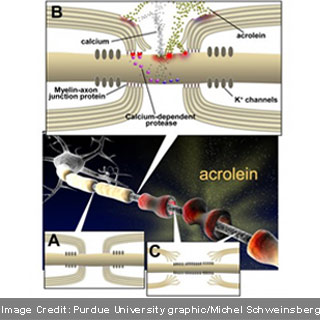 The toxic compound acrolein may be found in air pollutants such as tobacco smoke and auto exhaust. A latest study asserts that acrolein causes multiple sclerosis and can be treated by hypertension drug. The toxic substance was apparently increased by almost 60 percent in the spinal cord tissues of mice with a disease similar to multiple sclerosis.

Prior investigations have suggested that neuronal death due to acrolein can be restricted by administering the hydralazine drug. Known to help patients with hypertension, hydralazine supposedly delays onset of multiple sclerosis in mice. The medication presumably decreases the severity of symptoms by neutralizing acrolein. It was observed that a certain chemical signature of the drug apparently binds to acrolein and neutralizes it. So, synthetic alternatives with reduced side effects can probably be developed.

“The treatment did not cause any serious side effects in the mice. The dosage we used for hydralazine in animals is several times lower than the standard dosing for oral hydralazine in human pediatric patients. Therefore, considering the effectiveness of hydralazine at binding acrolein at such low concentrations, we expect that our study will lead to the development of new neuroprotective therapies for MS that could be rapidly translated into the clinic,” said Riyi Shi, a medical doctor and a professor of neuroscience and biomedical engineering in Purdue University’s Department of Basic Medical Sciences, School of Veterinary Medicine, Center for Paralysis Research and Weldon School of Biomedical Engineering.

During multiple sclerosis, the myelin insulation surrounding nerve cells and the nerve fibers may be destroyed. Acrolein allegedly degrades myelin and induces the production of free radicals, compounds resulting in further injury to tissues after disease or physical trauma. Experts assume that acrolein has a crucial role to free radical injury, especially in multiple sclerosis. MS mice treated with hydralazine supposedly had a decline in acrolein levels.

The research is published online in the journal Neuroscience.