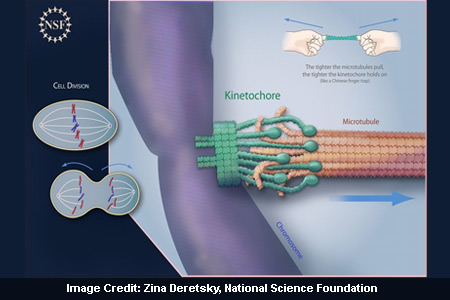 The human body is a house of more than a trillion cells and each cell may have the exact set of chromosomes. Any errors while moving chromosomes during cell division can possibly result in babies born with genetic conditions such as Down syndrome. In this aliment cells supposedly have an extra copy of chromosome 21. Researchers have now found an astonishingly easy method through which cells stabilize their machinery for forcing apart chromosomes.

Sue Biggins, an investigator in the Basic Science Division, Fred Hutchinson Cancer Research Center in Seattle, one of the senior researchers, remarked, “A striking hallmark of cancer cells is that they contain the wrong number of chromosomes, so it is essential that that we understand how chromosome separation is controlled. This knowledge would potentially lead to ways to correct defects before they occur, or allow us to try to target cells with the wrong number of chromosomes to prevent them from dividing again.”

The stabilizing tension seemingly benefits chromosomes to separate. Chromosome pairs can be appropriately connected to the spindle by attaching one to microtubules on the right and the other with microtubules on the left. Reportedly the kinetochore comes under mechanical tension and the attachment becomes stabilized. But if the chromosome pair is not properly attached, the kinetochores may not come under full tension.

The attachments are supposedly unstable and release quickly, giving another chance for proper connections to form. Apart from acting as connectors, kinetochores are also regulatory hubs which sense and fix mistakes in attachment. They probably release wait signals until the microtubule filaments are in the right place. With the help of techniques manipulating single molecules, investigators viewed the way kinetochores work. By such methods native kinetochore particles were probably purified from budding yeast cells.

The research was published on November 25 in Nature.