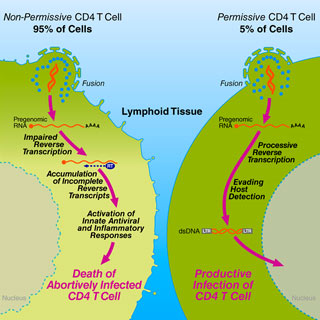 The mystery of HIV causing CD4 T cells death has apparently been cracked. Investigators from the Gladstone Institute of Virology and Immunology claim that loss of CD4 T cells leads to the development of AIDS. It is assumed that many immune cells dying in HIV infection are not infected and is often known as ‘bystander cell killing.’ So bystander cells may actually be the victims of a failed or abortive form of viral infection.

The probable step during which CD4 T cells die by using different anti-HIV drugs for arresting the virus at different points in its life cycle was analyzed. Experts presume that medications blocking viral entry or that obstructing the start of reverse transcription can halt the killing. Contrarily, drugs that seemingly acted later in the life cycle did not. Primary human lymphoid tissues like tonsil and spleen were thoroughly examined for understanding this death pathway. Researchers noted that tissues scrutinized may have approximately 98 percent of the body’s CD4 T cells. These cells possibly represent the major site where the virus reproduces itself.

Dr. Gilad Doitsh, who performed many of the studies and the lead investigator, affirmed, “Our study reveals that the virus actually enters the CD4 T cells that are destined to die and that the virus starts to make a DNA copy of its RNA, a process called reverse transcription. However, this process does not work well in the majority of these cells and the incomplete DNA intermediates that accumulate in the cytoplasm are sensed and trigger the cell to ‘commit suicide’ in an attempt to protect the body.”

Observations made by the experts suggest that as these cells die, they release cytokines proteins which result in inflammation and attract healthy cellular targets for promoting repeated rounds of infection and cell death. The findings shed light on the apparent way a natural cellular defense usually employed by the host to repel foreign invaders goes amiss in HIV infection. This flaw supposedly leads to a profound depletion of CD4 T cells. When this process is untreated, it may finally pave way for AIDS.

Mental problems like depression caused due to excess mobile use