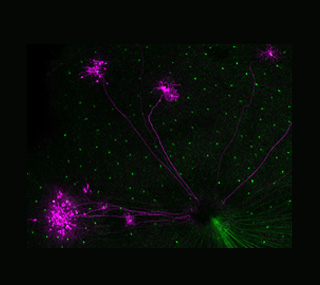 If this piece of information is to be believed then, eye apparently builds up circuits for the detection of motion. Neurobiologists from the Friedrich Miescher Institute for Biomedical Research of the Novartis Research Foundation have put forth the probable way eye creates circuits to analyze motion. It seems that detection of motion in the retina is based on circuit asymmetry, which is a fundamental computational principle in the brain.

Early after birth, nerve circuits in the retina supposedly undergo a rapid transition from symmetric to asymmetric circuit states. This rapid switch may not be dependant of visual inputs and are genetically predetermined. Asymmetry appears to be work in the brain on a cellular level. Nerve cells within the eyes allegedly reacting to movements from right to left are not active, when something moves from left to right and vice versa. Movement is possibly recorded in one direction only. Though similar asymmetries are known to be the basis for many brain computations, how and when this develops is apparently not known. It is predicted that in the retina morphologically identical starburst amacrine neurons sit around a retinal ganglion cell.

At an early stage, all the amacrine cells presumably connect to the ganglion cell and send their signal. The ganglion cell in turn appears to react with all these inputs. Suddenly the circuit may change behavior, and the ganglion cell reacts to only some of the amacrine neurons on one side, while the others are neglected. Among mouse, this shift seems to take place between day 6 and day 8 after birth, when the eyes of the mouse are still closed. Botond Roska, group leader at the FMI and colleagues believe that this switch is selective for inhibitory synaptic signals rather than positive ones, but the molecular details still need to be disentangled. It was concluded that asymmetry is not set up from the beginning, the circuit starts symmetrically and waits for a ‘switch signal.’ This signal allegedly initiates a transition to an asymmetric final state.

The research is published online in Nature.

Obese women and smokers seem to be at an increased risk...