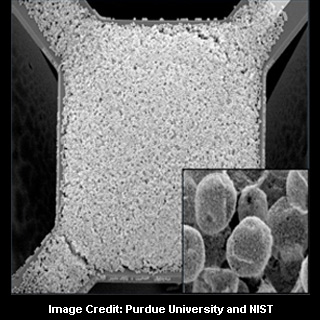 Accurately identifying chemical compounds known as ‘biomarkers’ may now be possible, thanks to the following article. Investigators from the Purdue University have developed a novel breath-analysis technology that appears at least 100 times better than previous breath-analysis technologies. The new approach is possibly detects biomarkers in the parts per billion to parts per million range that is much faster that the currently employed techniques.

The current technology apparently observes alterations in electrical resistance or conductance as gases pass over sensors built on top of ‘microhotplates.’ Scientists mention that microhotplates are tiny heating devices on electronic chips. Identifying biomarkers seems crucial for maintaining a patient’s health profile and noting the presence of cancer or other diseases. The newly developed technology was employed for detecting acetone, which is a biomarker for diabetes. A template made of micron-size polymer particles was coated with extremely small metal oxide nanoparticles.

“We are talking about creating an inexpensive, rapid way of collecting diagnostic information about a patient. It might say, ‘there is a certain percentage that you are metabolizing a specific compound indicative of this type of cancer,’ and then additional, more complex tests could be conducted to confirm the diagnosis,” quoted, Carlos Martinez, an assistant professor of materials engineering at Purdue.

By means of nanoparticle-coated microparticles instead of a flat surface, experts seemingly elevated the porosity of the sensor films. Therefore, the ‘active sensing surface area’ possibly developed improvement in sensitivity. A droplet of the nanoparticle-coated polymer microparticles was then deposited on each microhotplate. These microparticles may be approximately 100 microns square and contain electrodes shaped like meshing fingers. As the droplet dries, the electrodes supposedly heat up and burn the polymer, leaving aporous metal-oxide film and creating a sensor.

The research was published in the IEEE Sensors Journal.