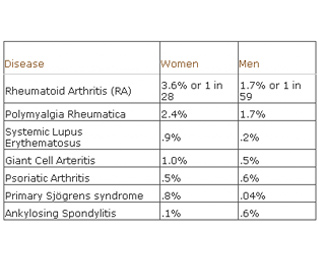 Even in the presence of prevalence as well as incidence rates, prevalence figures may underestimate individual risk for rheumatic diseases. Investigators from the Mayo Clinic have ascertained the lifetime risk of developing rheumatoid arthritis and six other autoimmune rheumatic diseases for both sexes. The study findings apparently have great significance in the health-space.

The study focused on offering an easy-to-understand average risk over a person’s lifetime, keeping in mind that the threat alters with progression in age. Scientists scrutinized data from the Rochester Epidemiology Project that included 1179 patients diagnosed between 1955 and 2007. The adult lifetime risk in the United States of developing some form of inflammatory autoimmune disease probably is 8.4 percent for women and 5.1 percent among men.

As per the year 2000 population figures, one woman in 12 and one man in 20 will be suffering from one of the conditions during their lifetime. Cynthia Crowson Mayo Clinic biostatistician and first author and colleagues predict that early diagnosis and intervention for people with heightened genetic risk of arthritis can be beneficial.

The study is published online in Arthritis and Rheumatism.