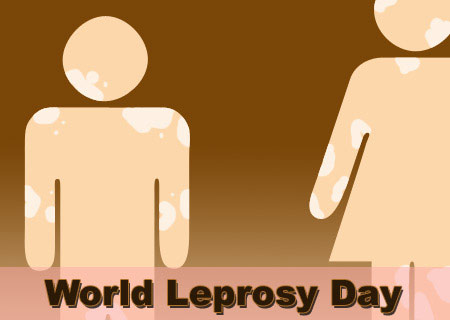 In 1954 Raoul Follereau, advocate of leprosy victims spear-headed World Leprosy Day. And since the past 65 years every 31st January is internationally recognized as the World Leprosy Day. Till date the International Leprosy Eradication Programme (ILEP) continues to grow and reach out millions of people in every country that still harbors its victims. ILEP is an international organization of 14 autonomic non-governmental organizations working towards eradication of leprosy and patient rehabilitation. Its slogan says all about their motto-Working for a world without leprosy.

Mycobacterium Leprae, the causative organism of this deadly disease was first identified by a Norwegian researcher called Hansen in 1873. Hence, leprosy is also known as Hansen’s disease. Leprosy is basically a chronic infectious disease spread primarily by droplet infection and long-term contact with a case. It generally targets the peripheral nerves and also affects the skin, eyes, bones, testes along with other internal organs.

The cardinal symptoms of the disease are:

Other symptoms include nodules in skin of face and ears, ulcers in the foot, nasal depression, loss of fingers or toes, etc. It can also lead to deformities like foot or wrist drop, claw hand, claw toes, perforation of palate, ear deformities, etc. Lepromin test is a clinical test available for screening leprosy, but it’s not a diagnostic test. Other tests based on chemical humoral response to M. Leprae like FLA-ABS and detection of monoclonal antibodies are more reliable diagnostically as well as to judge the therapeutic responses.

Various methods have been used to classify the severity of this disease which manifests itself in two popular forms, namely lepromatous leprosy and tuberculoid leprosy. The older Ridley-Jopling classification divides it into 5 categories based on their immunological status. The Indian and Madrid classifications divide it on a clinic-bacterial basis into 5 and 4 categories respectively. Placement in a category decides the duration of treatment and the number and kind of drugs to be utilized for complete cure. WHO divides the cases into Pauci-bacillary (having fewer than 1 million bacteria) and Multi-bacillary (having over 1 million bacteria) in skin smears to decide the duration of treatment.

Due to lack of an effective vaccine against leprosy, chemotherapy remains the mainstay of treatment and secondary prevention. Earlier, Dapsone was almost the only effective drug available but thanks to years of research now multiple drugs are available for those resistant to dapsone. Drugs like Rifampicin, clofazimine, ethionamide, protionamide, quinolones are also available today along with Dapsone which continues to dominate the chemotherapy field in cases of leprosy.

Using many of these drugs together constitutes Multi-Drug Therapy (MDT). Treatment is long and there are reactions called Lepra reactions which appear once the treatment is initiated. The reaction itself can cause permanent deformities if not treated in time. This reduces the therapy compliance and further adds to drug-resistance issues. Prophylaxis can be given to contacts of leprosy and has been tested intermittently on a small scale but its efficacy as a method of preventing and controlling leprosy on a national scale is yet to be determined.

Identification of the M. Leprae genome has given a great new hope of finding a permanent cure to this dreaded disease. Till technology helps find a way to utilize this vital piece of information directly into treatment worldwide, general health services have to be relied upon heavily in the fight against leprosy and the social stigma attached with it.

Rehabilitation is a very important aspect of Hansen’s disease as it can pave way for innumerable visible deformities which were the reason behind it being such a widely feared disease. As an ailment, it is the leading cause of deformities and crippling over the globe. It can deform any part including the face. Due to early nerve involvement, there is loss of sensations of hot/cold, pain. This leads to unrecognized and unintentional damage which is detected at a later stage, taking longer to resolve. Rehabilitation has to take place at a medical, surgical, social, educational and vocational level. Education and training or retraining of the individual must continue consistently for years till they become independent members of the society. Counseling is very important because the disease does more harm psychologically due to its earlier descriptions and lack of awareness about modern day therapies.

WHO defines a Case of Leprosy as one who shows clinical signs of leprosy with or without bacteriological confirmation of the diagnosis and those who have not yet completed a full course of treatment with Multi- Drug Therapy (MDT). After WHO resolved to reduce the disease prevalence world over by 90 percent in 1991, 112 countries out of 122 countries considered endemic for the disease (in 1985) had reached elimination at country level. By the end of 2005, it was a public health problem in only 6 countries. WHO further strengthened its fight against leprosy after 2005 by more timely detection of new cases and treatment with effective chemotherapy through MDT.

Thus the enhanced global strategy for 2011-2015 is maintenance of the declining trend. This decrease can be preserved by timely case finding and improved awareness of the disease for an early diagnosis, timely treatment as well as prevention of disability and impairment. It is necessary that National programmes in various countries where the disease is still endemic continue to detect cases early and provide free MDT.

Thus, leprosy as a disease has witnessed many decades of mankind with significant evolution in its detection and treatment yet a far cry from complete eradication which remains the need of the day. Well we hope that this year marks the beginning of more efforts towards the same.