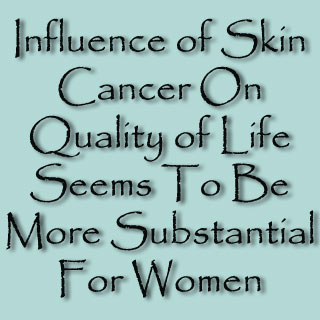 It now appears that skin cancer significantly influences the quality of life among women. In a major breakthrough, scientists found that women undergo more health-related quality of life issues than men for over 10 years following a diagnosis of the skin cancer melanoma. It was mentioned that melanoma is a chronic life-threatening disease that supposedly hampers a patient’s life.

At the time of the study, investigators thoroughly scrutinized responses from a Dutch population-based postal survey among patients with melanoma for 1998 to 2008 using the Eindhoven Cancer Registry. Participants received an impact of cancer survey to measure the well-being of long-term cancer survivors. The 41-item survey comprised questions on physical, psychological, social, existential, meaning of cancer and health worry. A total of 562 participants forming 80 percent completed the response rate to the survey.

Investigators add, “Women seemed to adjust their sun behavior more often (54 percent vs. 67 percent) than men and were more worried about the deleterious effects of UV radiation (45 percent vs. 66 percent). A small proportion of individuals experienced difficulties in getting health insurance as a result of their melanoma, but up to a third of the patients experienced difficulty getting life insurance, disability insurance and/or a mortgage. In clinical practice, this observation may imply that women need additional care, including follow-up and possibly counseling to optimally cope with their melanoma. However, men might be less aware of general measures of sun protection and need education about these measures after treatment.”

While the average age of the study subjects was around 57 years, 62 percent were female and 76 percent had a melanoma with a thickness of less than 2 millimeters. Majority of the women probably revealed higher levels of positive and negative cancer impacts. Cynthia Holterhues, M.D., from Erasmus MC, Rotterdam, the Netherlands, and colleagues, registered lowest scores on questions about cancer or treatment-related symptoms of the cancer that interferes with a patients’ socializing, traveling, or time with family. The highest score appeared for existential, positive outlook subscale, which engulfed elevated wisdom and spirituality because of the cancer experience.

The study is published in the February issue of Archives of Dermatology, one of the JAMA/Archive journals.