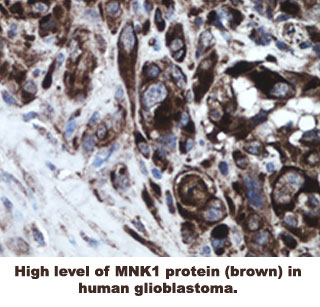 Glioblastoma multiforme (GBM) may be termed as the most common and aggressive form of brain tumor in humans. It now seems that MAP kinase-interacting kinase 1 (MNK1), a signaling molecule that controls proteins by phosphorylation plays a vital role in GBM. According to experts from the Friedrich Miescher Institute for Biomedical Research, the amount of MNK1 kinase is greatly increased in GBM and its inhibition decreases cell proliferation for substantially sensitizing glioma cells to rapamycin.

“We believe that dissecting glioma signaling networks will not only explain principles underlying gliomagenesis or treatment resistance, but it will also propose novel molecular strategies for effective therapy.” says Michal Grzmil, postdoctoral researcher in Brian Hemmings’ laboratory. “This is not to say that a treatment for glioblastoma is just around the corner. What we have done is the basic characterization of what we believe is an important signaling pathway in glioblastoma.”

It was therefore concluded that treatment with the MNK1 inhibitory compound CGP57380 (Novartis) along with rapamycin may produce a strong and additive cytostatic effect. MNK1-regulated events were also inspected to analyze the role of MNK1 in glioblastoma. MNK1 was allegedly linked with the translation machinery. It was mentioned that a MNK1 signaling cascade controlling translation of cancer-related RNAs including SMAD2 is a key component of the TGFß-signaling pathway. This component appears as the hallmark in tumor malignancy.

The research is published in Cancer Research.