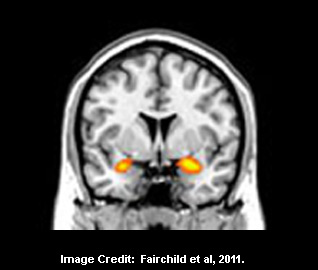 Conduct disorder (CD) is a psychiatric condition that may be characterized by elevated aggressive and antisocial behavior. It can probably develop in childhood or adolescence and raise the threat of mental as well as physical health problems later on. Neuroscientists from the University of Cambridge and the MRC Cognition and Brain Sciences Unit now claim that teenagers with severe CD have smaller brain structures.

In this study magnetic resonance imaging was put to use for measuring the size of particular regions in the brains of 65 teenage boys with CD. The results were then compared with 27 teenage boys without the symptoms of behavioral disorder. It was suggested that the amygdala and insula are remarkably smaller in teens with antisocial behavior. These regions of the brain possibly contribute to emotion perception, empathy and recognizing when other people are in distress. Alterations in brain structure were supposedly present in childhood-onset CD and also adolescence-onset CD.

“Studies such as this are tremendously important in understanding the causes of conduct disorder. Only when we are confident that we understand why the disorder develops can we apply this knowledge to the further development and evaluation of treatments. The disorder has a devastating impact on families and communities, and at the moment, we have few effective treatments,” remarked Dr Andy Calder from the MRC Cognition and Brain Sciences Unit, who co-led the research.

Authors mention that greater the severity of the behavior problems, greater the reduction in the volume of the insula may be. Changes in grey matter volume of areas within the brain can reportedly aid in understanding why youth with conduct disorder have complications in identifying others emotions. Scientists are currently investigating whether these changes in brain structure are a cause or a consequence of the disorder.

The study appears online in the American Journal of Psychiatry.