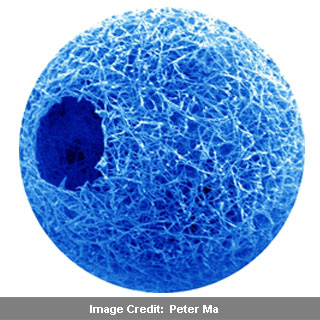 Repairing tissue appears as a very complicated process, but the only form of treatment for those suffering from certain types of cartilage injuries. In an attempt to benefit such patients, investigators have now crafted star-shaped, biodegradable polymers that can self-assemble into hollow, nanofiber spheres. Once these spheres are injected with cells into wounds, they presumably biodegrade, but the cells live on to form new tissue.

This nanofiber sphere as a cell carrier allegedly simulates the natural growing environment of the cell. In order to repair complex or oddly shaped tissue defects, an injectable cell carrier may be preferred to attain precise fit and minimize surgery. Currently, experts are working on a biomimetic strategy to design a cell matrix through biodegradable nanofibers. A cell matrix is believed to be a system that copies biology and supports the cells as they grow and form tissue.

The nanofiber spheres probably bigger than the cells they carry, degrade at the wound site and the cells they are carrying have already gotten a good start. This may be true because the nanofiber spheres provide an environment in which the cells naturally thrive. Researchers presume that this approach is more successful than the traditional cell matrix used today for tissue growth. At the time of testing, the nanofiber repair group presumably grew as much as three to four times more tissue than the control group. Further investigations will be conducted to analyze the way new cell carrier works in larger animals and eventually among people to repair cartilage and other tissue types.

The research is published online in Nature Materials.