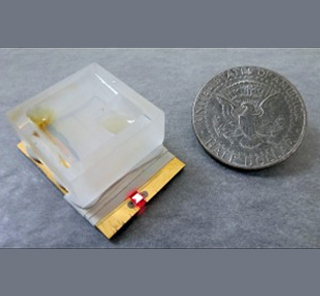 Acute pancreatitis is a sudden inflammation of the pancreas that supposedly leads to severe stomach pain, nausea, fever, shock and in some cases even death. In an attempt tackle this ailment, investigators from The University of Texas at Austin have developed a novel test that identifies acute pancreatitis and also restricts damage. A sensor has been reportedly made with a LED light, aluminum foil, gelatin, milk protein and few other cheap, easily obtainable materials.

Scientists have allegedly transformed Reynold’s Wrap, JELL-O and milk in such a way that they can detect organ failure. The new sensor is about the size of a matchbox and depends on a simple two-step process to diagnose acute pancreatitis. In the first step, a bit of blood extract is dropped onto a layer of gelatin and milk protein. If there are high levels of the enzyme trypsin, the gelatin will probably break down. This enzyme is believed to be overabundant in the blood of individuals suffering from acute pancreatitis. While conducting the second step, a drop of sodium hydroxide (lye) has to be added.

In case the trypsin levels are high enough to break down that first barrier, the sodium hydroxide will seemingly trickle down to the second barrier that is a strip of Reynold’s wrap. When the foil corrodes, both barriers appear permeable and a circuit is now able to form between a magnesium anode and an iron salt at the cathode. Brian Zaccheo, a graduate student in the lab of Richard Crooks, professor of chemistry and biochemistry and colleagues presume that the precise amount of current is to light up a red LED. Patients were diagnosed with acute pancreatitis only when the LED lights up within an hour. The key to this device seems to be a battery having a trypsin-selective switch that closes the circuit between the anode and cathode.

The research is published in the journal Analytical Chemistry.