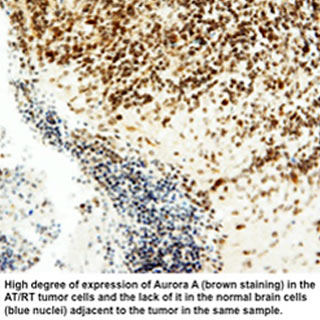 Rhabdoid tumors are aggressive childhood cancers that may generally strike children under the age of three years. They probably affect the brain or kidneys. In a major breakthrough, experts from the Albert Einstein College of Medicine of Yeshiva University have found a gene associated with this cancer. The gene termed as Aurora A can seemingly serve as a potential target for a number of therapies.

This gene is assumed to be expressed at higher-than-normal levels in many cancers. Its expression is presumably linked with poor prognosis. Mutations within a tumor suppressor gene named INI1/hSNF5 can reportedly result in rhabdoid tumors. During the research, it was observed that in rhabdoid tumors, loss of the tumor suppressor gene INI1/hSNF5 may change Aurora A’s expression that is necessary for tumor growth.

The research was published in the April 26 online issue of Cancer Research.